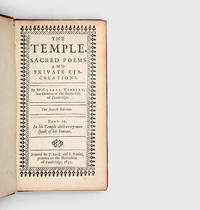 The Temple.: Sacred Poems and Private Ejaculations. The fourth edition.

Cambridge: Printed by T. Buck, and R. Daniel, printers to the Universitie,, 1635. Contemporary calf Duodecimo (147 x 79 mm). Contemporary calf, old reback with gilt foliate motifs to compartments, covers ruled in gilt, gilt centrepieces to covers bordered by initials "A.A", red edges. Somewhat rubbed, especially to reback, light wear at tips, tiny chip at fore edge of pp. 1/2, contents clean. A very good copy, retaining attractive contemporary covers. Fourth edition, following the first of 1633. The book - all editions were published posthumously - was enormously popular, with six editions by 1641. "Herbert's English poetry, despite its entanglement with his more partisan personal reputation, was enormously popular. The Temple... appealed to a readership spanning the political and ecclesiastical spectrum: Charles I read Herbert's poems when imprisoned in Carisbrooke Castle before his execution, while at the same time The Temple was undoubtedly admired by at least one of the regicides (Herbert's own stepfather) and recommended as devotional reading by the chaplain to Oliver Cromwell, Peter Sterry" (ODNB). Herbert's influence was enduring, including contemporary imitators such as Harvey and Ralph Knevet, and admirers such as Cardell Goodman, Richard Crashaw and Henry Vaughan. The early American poets Edward Taylor and Philip Pain both show his influence. Coleridge's expressed admiration in the Biographia Literaria signalled a revival in the 19th century, and T. S. Eliot championed him in the next. Herbert continued to be a major influence on later 20th-century poets writing in English, including Elizabeth Bishop and Seamus Heaney. ESTC S103995.

All major credit cards are accepted. Both UK pounds and US dollars(exchange rate to be agreed) accepted. Books may be returned within 14 days of receipt for any reason, please notify first of returned goods.

Peter Harrington is currently offering a normal national and international delivery service unaffected by COVID-19. Peter Harrington first started selling rare and antiquarian books from the Chelsea Antiques Market on London's King's Road in 1969, and have since grown to become one of the largest and best known antiquarian bookshops in Europe. Our shop extends over four floors offering up to 20,000 volumes. We also offer a full bookbinding and restoration service, and are members of the ABA and ILAB.

calf
Calf or calf hide is a common form of leather binding.  Calf binding is naturally a light brown but there are ways to treat...[more]
gilt
The decorative application of gold or gold coloring to a portion of a book on the spine, edges of the text block, or an inlay in...[more]
fore edge
The portion of a book that is opposite the spine.   That part of a book which faces the wall when shelved in a...[more]
edges
The collective of the top, fore and bottom edges of the text block of the book, being that part of the edges of the pages of a...[more]