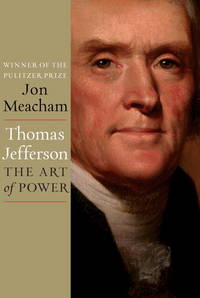 THOMAS JEFFERSON: The Art of Power

THOMAS JEFFERSON: The Art of Power

New York, New York, U.S.A.: Random House, 2012. 1st Edition. Hardcover. As New/Near Fine. 8vo - over 7¾" - 9¾" tall. 1st Printing In this magnificent biography, the Pulitzer Prize-winning author of American Lion and Franklin and Winston brings vividly to life an extraordinary man and his remarkable times. Thomas Jefferson: The Art of Power gives us Jefferson the politician and president, a great and complex human being forever engaged in the wars of his era. Philosophers think; politicians maneuver. Jefferson's genius was that he was both and could do both, often simultaneously. Such is the art of power. Thomas Jefferson hated confrontation, and yet his understanding of power and of human nature enabled him to move men and to marshal ideas, to learn from his mistakes, and to prevail. Passionate about many things-women, his family, books, science, architecture, gardens, friends, Monticello, and Paris-Jefferson loved America most, and he strove over and over again, despite fierce opposition, to realize his vision: the creation, survival, and success of popular government in America. Jon Meacham lets us see Jefferson's world as Jefferson himself saw it, and to appreciate how Jefferson found the means to endure and win in the face of rife partisan division, economic uncertainty, and external threat. Drawing on archives in the United States, England, and France, as well as unpublished Jefferson presidential papers, Meacham presents Jefferson as the most successful political leader of the early republic, and perhaps in all of American history. The father of the ideal of individual liberty, of the Louisiana Purchase, of the Lewis and Clark expedition, and of the settling of the West, Jefferson recognized that the genius of humanity-and the genius of the new nation-lay in the possibility of progress, of discovering the undiscovered and seeking the unknown. From the writing of the Declaration of Independence to elegant dinners in Paris and in the President's House; from political maneuverings in the boardinghouses and legislative halls of Philadelphia and New York to the infant capital on the Potomac; from his complicated life at Monticello, his breathtaking house and plantation in Virginia, to the creation of the University of Virginia, Jefferson was central to the age. Here too is the personal Jefferson, a man of appetite, sensuality, and passion. The Jefferson story resonates today not least because he led his nation through ferocious partisanship and cultural warfare amid economic change and external threats, and also because he embodies an eternal drama, the struggle of the leadership of a nation to achieve greatness in a difficult and confounding world. 759 pp, with Index. As new, first edition, first printing, in near-fine (short snag tear at lower rear fold, cleanly tape-repaired inside dust cover, else fine) in mylar-protected dust cover. (Not remainder-mared or price-clipped) BUND

Jon Meacham is the author, most recently, of Thomas Jefferson: The Art of Power, a #1 New York Times bestseller that has been named one of the best books of the year by The New York Times Book Review, The Washington Post, Entertainment Weekly, The Seattle Times, and the St. Louis Post-Dispatch . Meacham received the Pulitzer Prize for American Lion, his bestselling 2008 biography of Andrew Jackson. He is also the author of the New York Times bestsellers Franklin and Winston and American Gospel . Executive editor and executive vice president of Random House, Meacham is a contributing editor to Time magazine, a former editor of Newsweek, and has written for The New York Times and The Washington Post, among other publications. He is a regular contributor on Meet the Press, Morning Joe, and Charlie Rose . A Fellow of the Society of American Historians, Meacham serves on the boards of the New-York Historical Society, the Churchill Centre, and The McCallie School. He is a former trustee and regent of Sewanee: The University of the South, and has served on the vestries of St. Thomas Church Fifth Avenue and Trinity Wall Street church in New York City. Born in Chattanooga in 1969, Meacham was educated at The McCallie School and at Sewanee: The University of the South, where he was salutatorian and Phi Beta Kappa. He began his career as a reporter at The Chattanooga Times . He and his wife live with their three children in Nashville and in Sewanee.

Books shipped in secure packaging via USPS Media Mail, Priority Mail or Global Priority Mail, upon receipt of payment, unless customer requests another method of delivery. Shipping is within 24 hrs. of receipt of payment for money orders, and after three business days for personal checks. All book jackets are protected in mylar covers from Brodart. Customers have three business days within which to contact us with complaints about merchandise by e-mail. Returns must be approved, in original packaging material, and in the same condition as when shipped. Because we make every effort to have the best possible merchandise in the best condition, to describe it accurately and to package it securely, we will in most cases accept approved returns. Approved returns will be cheerfully refunded, or credit given toward other books. Our aim is to please, and to earn your return business with superior service and prompt delivery.

Seller rating:
This seller has earned a 5 of 5 Stars rating from Biblio customers.
Biblio.com member since: 2003
Los Angeles, California
Ask Seller a Question

Modern Literature, Mysteries, and More!
We specialize in collectible, contemporary signed first editions. First edition means the first printing. (Later printings of the first edition are typically not printed on acid-free paper, and should be avoided by collectors.) Signatures are obtained by us in person. Inscribed books sold by us may contain a line, a phrase, or a sketch that the author has chosen to add. Our signed books are not dedicated to anybody in particular (not to your grandmother, your Aunt Gladys, your ex-lover or your former cellmate), except in the rare case of a presentation copy from an author to a noteworthy person. All our books are hardcover, unless the book is an Advance Reading Copy, Uncorrected Proof, or PBO. You can expect that the books we send you will be as described, and in a physical condition worthy of the author’s having signed them. We do not sell remainder-marked books, signed or otherwise