Home Philadelphia Rare Books & Manuscripts Co., LLC (PRB&M) The trial, confessions and conviction of Jesse and Stephen Boorn for the murder of Russell Colvin, and the… 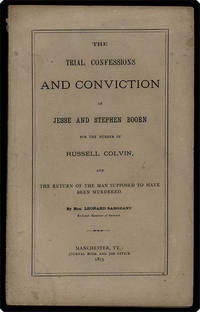 The trial, confessions and conviction of Jesse and Stephen Boorn for the murder of Russell Colvin, and the return of the man supposed to have been murdered.

The trial, confessions and conviction of Jesse and Stephen Boorn for the murder of Russell Colvin, and the return of the man supposed to have been murdered.

The trial of the Boorns "is one of the most famous cases of American criminal law and a constant reminder that innocent persons can be convicted. Russell Colvin, the alleged victim, had married a sister of the Boorns and had several children by her. He was mentally deficient and disappeared in 1812. Local gossip credited the Boorns with having disposed of him, presumably because he was a burden on the family. In the spring of 1819, the Boorns were arrested and, either from fear or mental weakness, they told stories involving each each other in the death of Colvin — Stephen's amounting to a confession of murder. They were tried and sentenced to be hanged; the state legislature, however, commuted Jesse's sentence to life imprisonment.
As a last resort a notice was placed in the papers requesting information about Colvin. A farmer in Monmouth County, New Jersey, believed he recognized a hired man in the vicinity from the description. This man, who was mentally deranged, was enticed to Manchester, arriving on December 22, 1819, six weeks before the day set for Stephen's execution. It was definitively established that he was the missing Colvin; he had apparently wandered off of his own volition" (McDade).
Sargeant (1793-1880), one of the Boorns' defense attorneys, offers this account as => a cautionary tale of the fallibility of the legal system when it comes to misidentifications. "Though published fifty-four years after the event, the pamphlet . . . contains important information on the discovery and return of Colvin" (McDade 113).

McDade, Annals of Murder, 111 (for the above quotation) & 113 for this account. As issued: Stitched, printed wrappers. Splitting a little at top and bottom of spine, faint minimal touches of old waterstaining and, at end, creasing across upper outer corners. Very good.

(US)
Bookseller’s Inventory #
39950
Title
The trial, confessions and conviction of Jesse and Stephen Boorn for the murder of Russell Colvin, and the return of the man supposed to have been murdered.
Author
Sargeant, Leonard
Book condition
Used
Publisher
Journal Book & Job Office
Place of Publication
Manchester, VT
Date Published
1873
Size
8vo (23.3 cm, 9.25"). 48 pp.

Seller rating:
This seller has earned a 5 of 5 Stars rating from Biblio customers.
Biblio.com member since 2009
Philadelphia, Pennsylvania
Ask Seller a Question

New
A new book is a book previously not circulated to a buyer. Although a new book is typically free of any faults or defects,... [More]
wrappers
The paper covering on the outside of a paperback.  Also see the entry for pictorial wraps, color illustrated coverings for... [More]
spine
The outer portion of a book which covers the actual binding. The spine usually faces outward when a book is placed on a shelf.... [More]