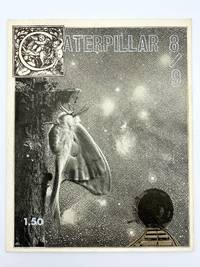 Two original collages that served as the designs for the covers of Caterpillar Issue 8/9, 1969

Two original collages that served as the designs for the covers of Caterpillar Issue 8/9, 1969

[San Francisco], 1969. In fine condition. Two original collages for the front and back covers, each measuring 5 x 6.75 inches. Illustration board with pictorial onlays from a variety of sources, the title lettering on front cover done by hand, cut out and applied on the back cover image, versos of each mount with printer or publisher's annotations about measurements and intended layout. Preserved in a custom folding case with a copy of the published issue of Caterpillar.

Caterpillar was edited and published by Clayton Eshleman in New York City and Sherman Oaks, CA from 1967 to 1973 in 20 numbers. In addition to poets such as Duncan, Rothenberg, Ginsberg, Creeley and Jackson MacLow, Caterpillar published visual artists and filmmakers, including Jess (whose work appeared on several covers), Carolee Schneeman, Nancy Spero, Wallace Berman, and Stan Brakhage, among others. TWO SUPERB ORIGINAL COLLAGES BY JESS. Several illuminating artistic symbols are worked into the cover: Jess adopted the initial capital 'C' from Hans Weiditz's Alphabet, circa 1520-21, which Weiditz made after designs from Albrecht DÃ¼rer. Weiditz's alphabet was popular from the time of its creation, and was copied by other woodcutters, and reproduced frequently after the rise of mechanical reproduction. It is clear from the cut that Jess used a reproduction of one of Weiditz's own original cuts, and its association with the mechanical figures (train tracks, gears) he adopted elsewhere in the two collages is an intriguing correspondence of the hand-printing (and hand-making, as with the figure of the woman with a spinning wheel) and mechanical ages. A similar dichotomy is found in Robert Duncan's essay included in the issue, "Man's Fulfillment in Order and Strife," in which he contrasts the followers of Ezra Pound and William Carlos Williams with "the new gang of concrete or constructivist poets."

fine
A book in fine condition exhibits no flaws. A fine condition book closely approaches As New condition, but may lack the... [More]
New
A new book is a book previously not circulated to a buyer. Although a new book is typically free of any faults or defects, "new"... [More]