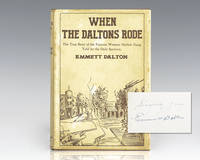 When the Daltons Rode.

When the Daltons Rode.

by Dalton, Emmett. In collaboration with Jack Jungemeyer

Garden City, NY: Doubleday, Doran & Company, Inc, 1931. First edition of Emmett Dalton's autobiography. Octavo, original cloth with smoking gun vignette to the front panel, pictorial endpapers, frontispiece portrait of Emmett Dalton after a photograph taken in 1892. Signed by the author on the half-title page, "Sincerely yours Emmett Dalton." Near fine in the rare original dust jacket with light rubbing. The Dalton brothers led one of the last gangs of horseback outlaws. Ironically, three of them - Bob, Grant, and Emmett - started their careers as deputy marshals. They soon decided that more money could be made from horse rustling and in 1888 they organized a band that carried on a thriving trade. When they came under suspicion toward the end of 1890, the brothers went to California, where on February 6, 1891, at the small station of Aila, they held up a Los Angeles-bound passenger train. The robbery failed when the baggage clerk excaped and the Daltons were unable to break into the safe. Grat was captured and sentenced to twenty years in prison, but escaped from the train carrying him to Folsom. The gang resumed operations in Oklahoma where, during the next two years, they robbed three trains before turning to the more lucrative trade of bank robbery. Modeling their plans on the James brothers, the Daltons struck the two banks at Coffeyville, Kansas on October 5, 1892, hoping, as Bob said, "to beat anything Jesse James ever did - rob two banks at once in broad daylight." However, the identical fate that befell the James gang at Northfield, Minnesota awaited the Daltons. Confronted with a large crowd of armed townsfolk, the gang attempted to shoot its way to safety; in the battle, Bob, Gat and two other gang members were killed, and Emmett was severely wounded and captured. It is the basis for the 1940 film directed by George Marshall and starring Randolph Scott, Kay Francis and Brian Donlevy.

Cloth
"Cloth-bound" generally refers to a hardcover book with cloth covering the outside of the book covers. The cloth is stretched...[more]
octavo
Another of the terms referring to page or book size, octavo refers to a standard printer's sheet folded four times, producing...[more]
First Edition
In book collecting, the first edition is the earliest published form of a book. A book may have more than one first edition in...[more]
fine
A book in fine condition exhibits no flaws. A fine condition book closely approaches As New condition, but may lack the...[more]
jacket
Sometimes used as another term for dust jacket, a protective and often decorative wrapper, usually made of paper which wraps...[more]
rubbing
Abrasion or wear to the surface. Usually used in reference to a book's boards or dust-jacket.
vignette
A decorative design or illustration placed at the beginning or end of a ...[more]