Home > Burnside Rare Books, ABAA > Where the Wild Things Are 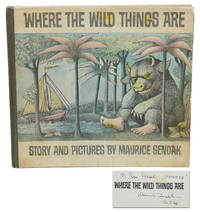 Seller rating:
This seller has earned a 5 of 5 Stars rating from Biblio customers.
Biblio.com member since: 2010
Portland, Oregon
Ask Seller a Question

Burnside Rare Books specializes in American and British literature, and rare nonfiction. We are located in downtown Portland, Oregon and open by appointment.

First Edition
In book collecting, the first edition is the earliest published form of a book. A book may have more than one first edition in...[more]
title page
A page at the front of a book which may contain the title of the book, any subtitles, the authors, contributors, editors, the...[more]
inscribed
When a book is described as being inscribed, it indicates that a short note written by the author or a previous owner has...[more]
Cloth
"Cloth-bound" generally refers to a hardcover book with cloth covering the outside of the book covers. The cloth is stretched...[more]
jacket
Sometimes used as another term for dust jacket, a protective and often decorative wrapper, usually made of paper which wraps...[more]
half title
The blank front page which appears just prior to the title page, and typically contains only the title of the book, although, at...[more]

Home > Burnside Rare Books, ABAA > Where the Wild Things Are