Home > David M. Lesser, Fine Antiquarian Books LLC > WHEREAS AT A GENERAL ASSEMBLY OF THE STATE OF… 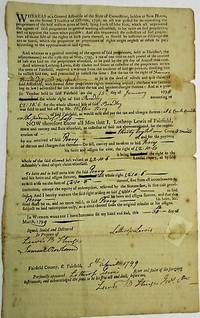 [Hartford?, 1799. Printed folio broadside, 7-3/8" x 12-1/4", completed in manuscript and docketed in manuscript on verso. Old folds, light foxing, else Very Good. An evidently unrecorded document on Connecticut claims to the Western Reserve, not located on ESTC, OCLC, or NAIP as of March 2017. "A general meeting of the agents of said proprietors, held at Hartford, on the 17th May, 1797", established a schedule of taxes. But Frances Bradley of Fairfield, failed to pay. Thus, on January 15, 1798, her property was sold for the amount of unpaid taxes, to Walter Terry of Fairfield. Lothrop Lewis of Fairfield, the tax collector, here officially transfers the property to Terry. His deed, dated March 30, 1799, is acknowledged on April 5, 1799. Lothrop Lewis, whose name is printed, also signs in ink; witnesses were Lewis Sturges and Samuel Rowland. In 1786 Connecticut relinquished claims to land west of Pennsylvania except for the Western Reserve, a portion of what is now south of Lake Erie in northeast Ohio. Connecticut assigned some of the Reserve to its citizens as compensation for losses suffered during the Revolution; and sold the rest to a consortium of Connecticut men, including Moses Cleaveland, who had formed the Connecticut Land Company. Their speculations were not successful, there being no effective local government in the Reserve capable of unraveling the tangle of land titles. Thus taxes imposed were frequently not collected. To force payment of the tax, on January 15, 1798 Lothrop Lewis conducted the sales. [Carpenter: ORIGIN AND LOCATION OF THE FIRELANDS OF THE WESTERN RESERVE, Ohio Archeological and Historical Quarterly, Volume 44, April, 1935, page180.] Lothrop [a/k/a Lathrop] Lewis [1759-1817], born in Fairfield, was its tax collector for many years. Lewis B[urr] Sturges [1763-1844], born in Fairfield, graduated from Yale, was clerk of the Probate Court from 1787 to 1791, a member of the Connecticut House of Representatives from 1794 to 1803; and a Federalist Congressman from 1805 to 1816. He spent his later years in Ohio. Samuel Rowland [1769-1837] was born in Fairfield, admitted to the bar in 1794, was a lawyer and town clerk for 42 years, and turnpike surveyor to the New York State line. [Perry: THE OLD BURYING GROUND OF FAIRFIELD, CONN., A MEMORIAL OF MANY OF THE EARLY SETTLERS OF FAIRFIELD... 1882, p.164.].

(US)
Bookseller Inventory #
33509
Title
WHEREAS AT A GENERAL ASSEMBLY OF THE STATE OF CONNECTICUT, HOLDEN AT NEW-HAVEN, ON THE SECOND THURSDAY OF OCTOBER, 1796, AN ACT WAS PASSED FOR INCORPORATING THE PROPRIETORS OF THE HALF MILLION ACRES OF LAND, LYING SOUTH OF LAKE ERIE, WHICH ACT IMPOWERED THE AGENTS OF SAID PROPRIETORS IN GENERAL MEETING ASSEMBLED, TO LAY TAXES ON SAID PROPRIETORS, AND TO APPOINT THE TIMES WHEN PAYABLE; AND ALSO IMPOWERED THE COLLECTORS OF SAID PROPRIETORS TO MAKE SALE OF THE RIGHTS OF SUCH PARTS THEREOF, AS SHOULD BE SUFFICIENT TO DISCHARGE THE TAX OR TAXES, WHICH THE PROPRIETOR OR PROPRIETORS OF RIGHTS MIGHT NEGLECT OR REFUSE TO PAY..
Author
[Connecticut Western Reserve]
Book condition
Used
Quantity available
1
Place of Publication
[Hartford?
Date published
1799
Product_type

folio
A folio usually indicates a large book size of 15" in height or larger when used in the context of a book description....[more]
verso
The page bound on the left side of a book, opposite to the recto page.
New
A new book is a book previously not circulated to a buyer. Although a new book is typically free of any faults or defects,...[more]

Home > David M. Lesser, Fine Antiquarian Books LLC > WHEREAS AT A GENERAL ASSEMBLY OF THE STATE OF…