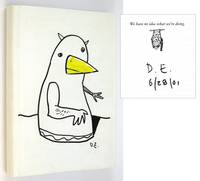 Description:
(n.p.): McSweeney's. (2000). A drawing by Eggers of a broken bird-like creature, executed on the previously blank dust jacket of Timothy McSweeney's Issue No. 5. Signed (initialed) by Eggers. Additionally initialed by Eggers in 2001 and signed by Lydia Davis, Susan Minot, Ben Greenman, Lawrence Weschler, Paul LaFarge, Ann Cummins, and Sarah Vowell Issue No. 5 was the first hardcover issue of Timothy McSweeney's Quarterly Concern, and it was issued in three variant bindings and four variant dust jackets. This is the Ted Koppel binding with the previously blank white front. One tiny corner tap, else fine in a very near fine dust jacket. Unless otherwise noted, our first editions are first printings. First Edition. Hardcover. Near Fine.
Item Price
$1,000.00
$3.99 shipping to USA 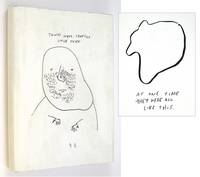 Description:
(n.p.): McSweeney's. (2000). An ink drawing by Eggers of a malformed human, captioned "Things have changed since then, executed on the previously blank dust jacket of Timothy McSweeney's Issue No. 5. Signed (initialed) by Eggers. With an additional ink drawing by Eggers on the flyleaf, of an amoeba shape, captioned, "At one time they were all like this." Eggers has been selling his captioned paintings and prints of captioned animals to benefit ScholarMatch (which he also founded), an organization that funds college educations. Additionally signed by Ben Greenman. Issue No. 5 was the first hardcover issue of Timothy McSweeney's Quarterly Concern, and it was issued in three variant bindings and four variant dust jackets. This is the Ted Koppel binding with the previously blank white front. Two tiny spots to foredge and small lower board nicks; near fine in a very good, mildly dusty jacket with a couple of closed tears. Unless otherwise noted, our first editions are first printings. First Edition.… Read More
Item Price
$850.00
$3.99 shipping to USA 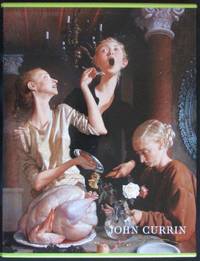 Description:
New York: Rizzoli, 2006. This is a fine hardcover copy without dust jacket as issued with no wear at all. SIGNED by the artist, John Currin, in ink on the title-page just below his printed name. Not inscribed to anyone, just signed. Stated first edition. This monograph was prepared to accompany the exhibition at the Gagosian Gallery from November 11 to December 22, 2006. This large book presents his complete body of work as of 2006, approximately 400 paintings and drawings, many of which are previously unpublished. Illustrated throughout in color. Exhibition history. Bibliography. 13" high X 10" wide, 382 pages. A beautiful signed first edition copy. Large very heavy book, foreign shipping will be extra. This book will be securely wrapped and packed in a sturdy box and shipped with tracking.. Signed by Artist.. First Edition. Hard Cover. Fine.
Item Price
$750.00
$4.50 shipping to USA 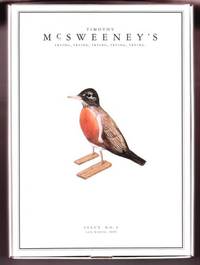 Description:
NP: Warner Bros. and Harper Collins.. Fine with no dust jacket. 2009. First Edition; First Printing. Hardcover. Specially produced promotional item for the film adaptation of Maurice Sendak's celebrated book. INSCRIBED by director Spike Jonze to a member of the Hollywood foreign press on the pictorial end-paper of the book "Heads on and we shoot the making of where the wild things are." This book which is constructed in tandem with the separate screenplay and additional production volume, stacked together. Each heavily illustrated in full-color (240pp. ). In addition there is a reprint edition in cloth & dust jacket of the book, itself as-well-as a large black silhouette poster of a Wild Thing. (27" X 39" folded in twelves) Housed inside a large folding pictorial box (11 1/2" x 10 3/4"). Fine, but for a 1"-inch repair crack at bottom edge of box. A remarkable promotional piece. ; 11 1/2" X 10 3/4" .
Item Price
$375.00
$8.00 shipping to USA 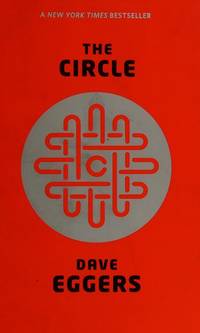 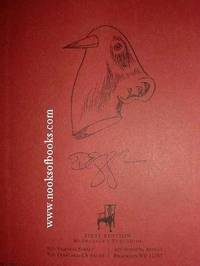 Description:
Brooklyn, NY, U.S.A.: McSweeney's Books, 2002. In Fine condition. Gray boards quarterbound in black cloth. The spine is stamped in gray. Red endpapers. 371pps. No dustjacket, as issued. There is a very mild bump to the upper rear tip, otherwise clean, tight, square, and bright. Yet to be read. No previous ownership markings. This is one of the scarce Stated First Edition copies, sold only on the author's website and preceding the trade edition. SIGNED by Eggers on the rear pastedown (copyright page) -- without further inscription, but with a one-of-a-kind drawing of a bird with human ears. (This drawing refers to the legend of The Jumping People, a South American tribe of bird-worshippers who tried to emulate the birds' flight by jumping off the cliffs, hoping that in time they would learn how to fly. These Jumping People, according to the novel, left a message on the cliff above their village, carved in stone, for the conquistadors to find. The Spaniards later translated this message as… Read More
Item Price
$300.00
$7.00 shipping to USA

Description:
San Francisco: McSweeney`s, 2006. First. hardcover. fine. 8vo, pictorial brown boards (one corner bumped) San Francisco: McSweeney's 2006. First Edition<br/> <br/> Biographical fiction centering on the "Lost Boys" of the Sudanese War. Without dust wrapper, as issued, but with paper sleeve on the rear cover with advance comments on the book. Presentation from Eggers -"Thank you so much for listening".<br/> <br/>
Item Price
$250.00
$6.00 shipping to USA

Description:
New York City, NY: HarperCollins Publishers/McSweeneys, 2009. First Edition. First Printing.. Hardcover. As New/No Dust Jacket, As Issued.. New York City, NY: HarperCollins Publishers/McSweeneys, 2009. Hardcover. As New/None, As Issued. First Edition/First Printing. Unpaginated. Pictorial book-length account on subject. One of the best books on film adaptation and film-making ever published in our time. The First Hardcover Edition. Precedes and should not be confused with all other subsequent editions. Published in a small and limited first print run as a hardcover original only. The First Edition is now scarce. Presents Spike Jonze's "Heads On And We Shoot: The Making of 'Where The Wild Things Are' (With Complete Screenplay) ". His ground-breaking film adaptation of Maurice Sendak's beloved classic, together with the film itself on two discs. The lavishly produced book is presented in three parts, accordion-style: a) "Heads On And We Shoot", which describes the… Read More
Item Price
$220.00
$8.95 shipping to USA 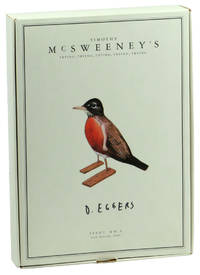 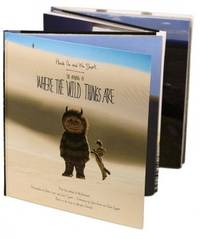 Description:
US: Harper Collins. A near fine US first edition, first printing hardback - no dustjacket (as issued) - All my books are always securely packed with plenty of bubblewrap in professional boxes and promptly dispatched (within 2-3 days) - SIGNED BY SPIKE JONZE - Pictures available upon request. . Near Fine. Hardcover. 1st Edition. 1st Printing. 2009.
Item Price
$194.80
$23.88 shipping to USA

Description:
McSweeney's Quarterly, 2001. First Edition . Hardcover. Fine/Issued without dust jacket.. Fine. Nine spearately bound booklets in wrappers enclosed in a rather primitive wrap-around hardcover binding with rubber band to keep everything from falling apart. This copy is signed and dated by Eggers on the rear board and by Michael Chabon and Anne Cummins in their individual booklets
Item Price
$180.00
$5.00 shipping to USA 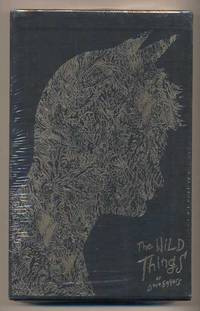 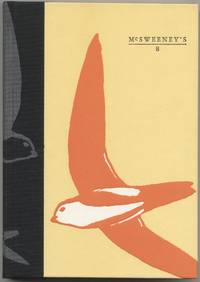 Description:
McSweeney's. Very Good. 2002. First Edition; First Printing. 0971904715 . Very Good Plus. Minor rubbing at corners. Cover is clean, bright, and unscratched. This is a beautiful cover, but one of their most fragile, which is saying something as fragile as McSwnys covers tend to be. The paper used for the case-wrap of McSwnys 8 shelf-wears horribly and often splits at the corners. ; Signed by Dave Eggers on ffep in black Sharpie. .
Item Price
$160.00
$7.00 shipping to USA 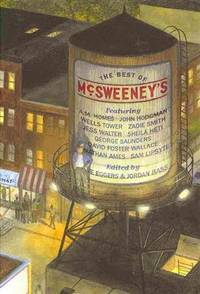 Description:
McSweeney's. Near Fine. 2013. First Edition; First Printing. 1938073592 . Near Fine / Near Fine. Back-cover sticker is present. This is the Indiespensable edition of "The Best of McSweeney's. The Indiespensable edition is supposed to be signed 6X: Dave Eggers, Jordan Bass, Andrew Sean Greer, Ben Jahn OR Peter Orner, Jess Walter, and Arthur Bradford. NOTE: Jordan Bass did NOT sign this copy. Apparently it slipped through. This is the only copy that I have seen missing any of the six signatures. There are two variants of this signing. Peter Orner and Ben Jahn both signed in the same spot. Each of them signed approximately one-half of the copies. This is the 'Ben Jahn variant'. The other five signatures were the same five people for all copies. Each of them signed in approximately the same place. Once in a while Jess Walter signed a bit higher up than his usual spot. Arthur Bradford signed toward the bottom-left-corner on a fair number of copies. It… Read More
Item Price
$160.00
$7.00 shipping to USA 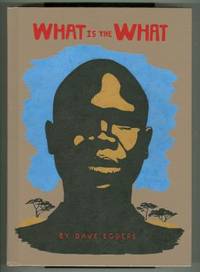 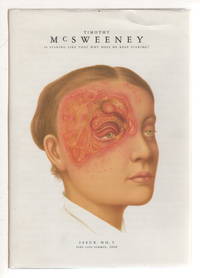 Description:
Gurnee:: McSweeney's,, (2000). Near fine in a near fine dust jacket (upper corner of a few pages of textblock slightly bumped, crease to dj near the upper edge of front cover). First printing. The first issue in this innovative publication to be issued in hardcover, in several variant bindings and dust jackets. Contributors include Sarah Vowell, Paul LaFarge, Susan Minot, Alastair Reed, Lawrence Weschler, Ann Cummins, Joshuah Bearman, Elizabeth Klemm, Ben Marcus, Lydia Davis, Susan Minot (on the kidnapped girls of Uganda) and many others. Color fold out at page 160. SIGNED by Eggers on the first page, under the printed comment "we have no idea what we are doing." Notes on contributors. Bound in white boards printed with 2 full pages of text (outtakes from Minot's article) in a dust jacket with an illustrated front cover, list of contributors on back cover. 288 pp.
Item Price
$150.00
FREE shipping to USA 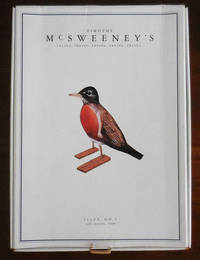 Description:
Iceland: Oddi Printing, 2000. First Edition. Near Fine. Decorated hinged cardboard box containing fourteen discrete booklets. With contributions by Moody, Ben Miller, George Saunders and many others. Contents are in fine condition. The box is a bit worn. This copy has been separately SIGNED BY RICK MOODY AND DENIS JOHNSON at their contributions.
Item Price
$150.00
$4.00 shipping to USA 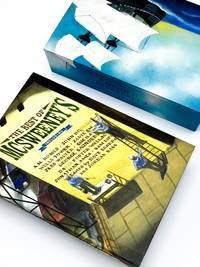