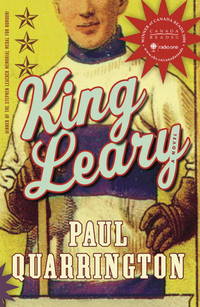 Description:
Percival Leary was once the King of the Ice, one of hockey's greatest heroes. In the South Grouse Nursing Home, where he shares a room with Edmund 'Blue' Herman, the antagonistic and alcoholic reporter who once chronicled his career, Leary looks back on this tumultuous life and times: his days at the boys' reformatory when he burned down a house; the four mad monks who first taught him to play hockey; and the time he executed the perfect 'St Louis Whirlygig' to score the winning goal in the 1919 Stanley Cup final. Now all but forgotten, Leary is only a legend in his own mind until a high-powered advertising agency decides to feature him in a series of ginger ale commercials. With his male nurse, his son, and the irrepressible Blue, Leary sets off for Toronto on one last adventure as he revisits the scenes of his glorious life as King of the Ice.
Item Price
$6.15
$10.76 shipping to USA

Description:
Married 20 years to Thomas and living in Nashville with their two children, Maggie is drawn ineluctably into a passionate affair while still fiercely committed to her husband and family. What begins as a platonic intellectual and spiritual exchange between writer Maggie and poet James gradually transforms into an emotional and erotically charged bond that challenges Maggie's sense of loyalty and morality, drawing her deeper into the darkness of desire.
Item Price
$7.30
$10.76 shipping to USA