Description:
A solid copy of this edition of reprints of 12 plates by McBey, who was one of the more influential figures of the rise of etchings in the early 20th Century. The pages on this copy are moderately foxed; foxing does not affect the rectos of the tipped-in plates, though a few have slightly visible stains on the versos.
Taped to the front free endpaper is a typed letter, signed, from McBey to Roi Partridge at Mills College from 1941 talking about a meeting while McBey was visiting the San Francisco area. Laid in are also three handwritten letters from McBey's wife Marguerite to Partridge and his wife (his third wife, May Ellen Fisher) from 1941 and 1943, talking about photography, their visits, and potential future visits. Also included is a four-page prospectus for the Minton, Balch edition of The Etchings of James McBey by Malcolm C. Salaman, including list prices for the book in both its trade and limited editons, with three reproductions of McBey etchings. The prospectus shows serious edge-wear,… Read more
Item Price
$100.00
$3.50 shipping to USA

Description:
One of one thousand copies of an advance edition apparently issued without a dustjacket. Notation about the edition on the page facing page 1. Basis for the Disney film. Translated by one of the principals in the Alger Hiss scandal. A tight clean copy with minimal bumping of the corners and spine. Page edges slightly dirty, gold on spine somewhat faded. Still, an excellent copy of this scarce issue which the publishers said they would always prefer to the trade edition. Scarce.
Item Price
$500.00
$3.50 shipping to USA 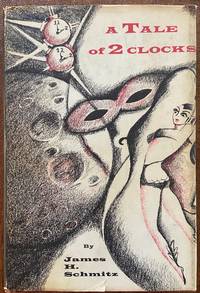 Description:
A typical novel of Schmitz's Federation series: fast-paced and very enjoyable. Torquil published books for the SF Book Club, mostly: they did a few copies with a trade dust-jacket. Currey lists the first trade edition as having a printing code D6 on page 206, a rubber-stamped price on the upper corner of the front jacket flap, and the lower flap cut: this copy fits that description. There are also copies with a printed price of $3.50 -- both trade editions are exceedingly scarce. This copy is tight and clean, and appears unread: the jacket's spine is age-darkened and has a few small chips missing and some small tears (see photo). The bottom edge of the boards shows some wear. Scarce copy of the trade edition. The jacket lists the title as "A Tale of 2 Clocks" -- everything on the book lists it as "A Tale of Two Clocks." I've chosen to go with spelling out the number rather than using the numeral.
Item Price
$35.00
$3.50 shipping to USA

Description:
pecially bound and slipcased edition, signed all 35 authors, numbered 293 of 500 copies. Fine in original publisher's slipcase. DJ art by Harry O. Morris. This anthology contains: I Scream Man by Robert R. McCammon; The Young Man Who Did Not Know His Father; and We Are the Dead by Darrell Schweitzer; The Elder; and Optional Music for Voice and Piano by Poppy Z. Brite; Piano Moon; and Self-Possessed by Steve Rasnic Tem; The Well that Whispered Darkness by Ardath Mayhar; Site B by Colleen Drippe'; The Visitor; and They Came From The Suburbs by Paul F. Olson; Mole; and The Place Where All Things Go To Die by Susan M. Watkins; Razors by Ron Wolfe; The Gap Nearly Closed Today by J. N. Williamson; Black Noise by Pamela J. Jessen; On A Dark October by Joe R. Lansdale; Night Rats by Gary L. Raisor; Passing Phase by Ramsey Campbell; Snow by Kathryn Ptacek; Witch Woman; and The Runt by Bentley Little; The Scar by Dennis Etchison; Red Zone; and Oasis by Brian Hodge; 5a Bedford Row by Graham… Read more
Item Price
$95.00
$3.50 shipping to USA 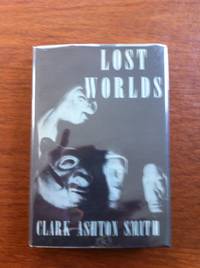 Description:
New York: Random House, 1971. First edition, as stated. Hardcover. Good/very good. The first of the Parker novels to be published as a hardcover original, and now quite scarce. As is typical for Random House books of this period, the number line goes from 9 down to 2; the statement "First Edition" on the verso of the title page implies this is a first printing.This is a Good copy in a VG dustjacket; the book would be VG except that a small portion (3-1/2x11cm) of the rear free endpaper is cut out. Moderate spine rolling, spine ends slightly bent, a bit of general wear. Jacket has noticeable edge wear, a few small cuts and one cut on the bottom foredge of the rear fold. It'll look quite reasonable on the shelf, and it has no problems affecting the text -- but that little bit of missing paper lowers its price considerably. The book is dedicated to Joe Gores, and includes a scene that matches one in one of Gores' novels, told from the other side -- an odd bit of cross-writing that both authors appeared… Read more
Item Price
$90.00
$3.50 shipping to USA 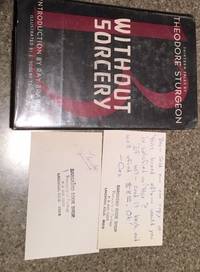 Description:
First trade edition of Sturgeon's first book. There was a signed edition issued as well, and an advance copy of a single story ("It") -- this copy will do you just fine until you can find either of those scarcities. Sturgeon is one of the most important writers of science fiction/fantasy short stories. If you don't already know his stories, nothing I can say will convince you about buying this book. Get a cheaper edition, read his stories, then come back.This copy is interesting because it has laid in two index cards from Camille Cazdessus ("Caz" oin the signature) of Sargasso Book Shop, Lakewood CO: one of the early dealers in SF and fantasy books. The first one says "Ben -- sold our one copy of this boxed edition -- would you be satisfied with this? If not -- send it back and we'll refund $8.00. Okay? -- Caz" The other card says "Thanks!" in a significantly different handwriting. Both cards have The Sargasso Book Company rubber stamp. The "Ben" mentioned in the first card was probably Ben Solon,… Read more
Item Price
$70.00
$3.50 shipping to USA