Description:
Portland, OR: [Theodore Mentzer], Photographer, [ca. 1925]. Two images printed on one large silver gelatin panoramic photograph, sized 40 x 16 in., archivally mounted on foam core, and framed, with remarkable strong and bright contrast. A remarkable pair of photographs forming a large panoramic image of what appears to be a custom coach body on a 1925 Stutz Bearcat by noted Portland motoring enthusiast and auto racer, Frank Tauscher. The first view is a side view showing the 2-seat convertible fitted with wire wheels, and Continental spare wheel package, side-by-side with the second three-quarter view showing the front grill license plate and Stutz badging. Tauscher (1879-1939) was an Austrian-American wood carver who first began working for the predecessor to Doernbecher’s Furniture Company in 1890, and would continue working for the company through his entire career, and began racing automobiles as early as 1913 in a Cole winning the Inner-City Century Trophy, July 5 in the Tacoma Road Races. He… Read more
Item Price
$950.00
$4.80 shipping to USA 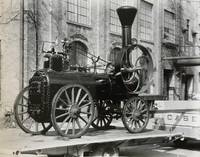 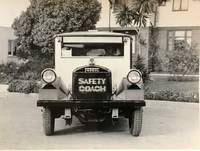