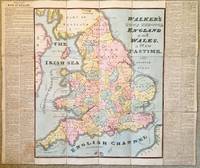 Description:
This is an original linen-backed folding map game published in London in 1809 by William Darton.
Overall 25 1/2 x 21 inches. It is an early example of the "Cartographic Game" genre that became very popular in later Victorian England. The map folds and fits into the original slipcase with printed label. The rules are printed in columns at the sides. The object of the game is to move tokens, originally in the shape of pyramids, their landing place determined by use of a teetotum (called a totum at that time) and read about the region upon which one landed. It was both competitive and educational.
Early map games such as this have become very scarce. Most did not survive since they were children’s toys. This one is in remarkably good condition. There is a light stain in the lower left of the map part and general light age-toning but the colors are bright and crisp. The linen backing is sound and the folds are intact. The original slipcase has two printed paper labels.