Home The John Bale Books LLC [SCRIPT] "TELL IT LIKE IT IS" TV SPECIAL, 1966. Original typed proposal for a "Television Spectacular" 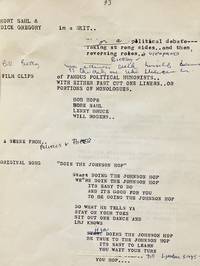 [SCRIPT] "TELL IT LIKE IT IS" TV SPECIAL, 1966. Original typed proposal for a "Television Spectacular"

3-ring binder labeled "TELL IT LIKE IT IS" TV SPECIAL, 1966, described as "a proposal for a Television Spectacular to be built around a name Headliner like Bob Newhart--Alan Arkin or a Don Rickels (sic). 97 leaves, typed on recto side only, many with various corrections, additions, cut and paste editing, etc. Best we can tell it was never produced. Author(s) unknown.

A loose collection of about a dozen proposals, treatments, or skits, usually stapled or paperclipped, part script, part direction, part idea stream, in various stages of completion, showcasing a panoply of stars from the period-- Bob Newhart, Bob Dylan, Dick Clark, Ronald Regan, Lenny Bruce, Petula Clark, to name only a few. An ambitious piece of social commentary presented in jokes, puns, word play, cornball skits, comic monologues and nutty sendups, interspersed with pop music & movie clips; a lighthearted mirror of society referencing hippies, protests, violence, government, and, of course, sex, etc. A unique artifact from the 1960's which, nearly 60 years on, seems to have an historical value as a representation of the bizarre nature of the variety show formula of that era because the material is dated.

REPORTER: "Mr. Regan-- What is your comment about the rumor that there were homosexuals in your political organization?

REGAN: Boys will be boys.

Seller rating:
This seller has earned a 2 of 5 Stars rating from Biblio customers.
Biblio.com member since 2018
WATERBURY, Connecticut
Ask Seller a Question

acceptable
A non-traditional book condition description that generally refers to a book in readable condition, although no standard exists... [More]
leaves
Very generally, "leaves" refers to the pages of a book, as in the common phrase, "loose-leaf pages." A leaf is a single sheet... [More]
recto
The page on the right side of a book, with the term Verso used to describe the page on the left side.