Join us October 7–16, 2022 for our upcoming virtual antiquarian book fair!
Preregister now for Biblio.live and get $10 to use at the fair.
Home The Franklin Bookstore Fargo Little Country Theatre, 1928 Theatre Arts, Twelfth Night Scenes 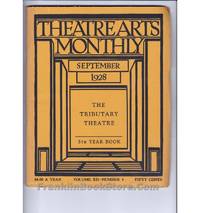 Condition: Very Good, Complete 8" x 11" tall with about 90 pages and Arts Advertisements from 1928 on heavy paper. With B&W Photos, drawings

Signet of The Jitney Players

Silhouette of the Gloucester Players in Liliom

The Pate and the Tart Scene

Sun Up Scene Playhouse of University of Oklahoma

Architectural unit setting by Waslaw Rychtarik for a Shakespearean play

The Tidings Brought to Mary Scenes

The Life of Man Scenes

The Vikings at Helgeland Scenes

Grove near Amenia a perfect Forest of Arden

Stage built over the Waters of an Old Mill Race at U. of Oregon, Eugene, Oregon

Scene from ritual Dance of the Della Robbia Annunciation

Design by Paul Stephenson for Thornton Wilder's The Trumpet Shall Sound

Theatres at Princeton and Dallas

Artist's Approach to the Theatre by Robert Edmond Jones

Prometheus and Melpomene by Thomas Wilfred

An Art Theatre in Italy by Alessandra Scalero

After Tchekov Shakespeare by Samuel A. Eliot Jr.

Seller rating:
This seller has earned a 4 of 5 Stars rating from Biblio customers.
Biblio.com member since 2016
Humboldt, Tennessee
Ask Seller a Question

About The Franklin Bookstore

The Franklin Bookstore began in 1996 by Robert & Ruth Lynn in Humboldt, Tennessee. Retiring from the Navy and a business career and always a history buff, Robert and Ruth opened the business of selling and dealing with rare books, magazines and newspapers. Many items were acquired from other rare books dealers from across the country. The Franklin Bookstore continues with his offspring mindful to keep the high ethical business examples that Dad established. We feel honored to be associated with such a virtual history of the printed word, inherently beautiful and fascinating artifacts of our cultural past. Every item we offer is guaranteed to be absolutely genuine and as described. A large part of the inventory is periodicals that date from the Revolutionary War to World War II and into the 21 century.