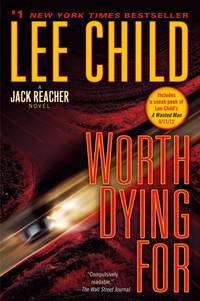 Lee Child is the author of seventeen Jack Reacher thrillers, including the New York Times bestsellers Persuader, The Enemy, One Shot, and The Hard Way, and the #1 bestsellers The Affair, Worth Dying For, 61 Hours, Gone Tomorrow, Bad Luck and Trouble, and Nothing to Lose . His debut, Killing Floor, won both the Anthony and the Barry awards for Best First Mystery, and The Enemy won both the Barry and Nero awards for Best Novel. Foreign rights in the Reacher series have sold in more than forty territories. All titles have been optioned for major motion pictures. A native of England and a former television director, Child lives in New York City, where he is at work on his next thriller.

Description:
Bantam. Used - Good. Shows some signs of wear, and may have some markings on the inside.
Item Price
$6.54
FREE shipping to USA

Description:
Bantam. Used - Good. Ships from Reno, NV. Former Library book. Shows some signs of wear, and may have some markings on the inside. 100% Money Back Guarantee. Shipped to over one million happy customers. Your purchase benefits world literacy!
Item Price
$6.54
FREE shipping to USA

Description:
Bantam, August 2012. Trade Paperback. Very Good. Has remainder mark. This is a nice book with no writing or highlighting. We are real people in a real bookstore, contact us with any questions (preferrably about books).
Item Price
$4.99
$3.50 shipping to USA