How the Scots Invented the Modern World: The True Story of How Western Europe's Poorest Nation Created Our World and Everything in It by Arthur Herman ISBN 13: 9780609606353

ARTHUR HERMAN, author of The Idea of Decline in Western History and Joseph McCarthy: Reexamining the Life and Legacy of America’s Most Hated Senator , received his doctorate in history at Johns Hopkins University. He is the coordinator of the Western Heritage Program at the Smithsonian Institution, an associate professor of history at George Mason University, and a consulting historical editor for Time-Life Books. He lives in Washington, D.C.

Description:
Crown. Used - Good. Shows some signs of wear, and may have some markings on the inside.
Item Price
$6.48
FREE shipping to USA

Description:
Crown. Used - Very Good. Very Good condition. Like New dust jacket. A copy that may have a few cosmetic defects. May also contain a few markings such as an owner’s name, short gifter’s inscription or light stamp.
Item Price
$11.26
$3.99 shipping to USA

Description:
Good. Used book in good condition. Has wear to the cover and pages. Contains some markings such as highlighting and writing. 100% guaranteed. 070320
Item Price
$16.74
$3.99 shipping to USA 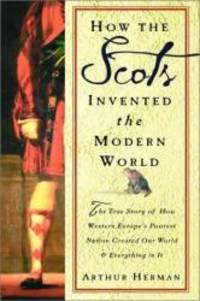 Description:
Crown Publishers, New York: 2001. Hardcover with dustjacket. Very good condition. Mention of Scotland and the Scots usually conjures up images of kilts, bagpipes, Scotch whisky, and golf. But as historian and author Arthur Herman demonstrates, in the eighteenth and nineteenth centuries Scotland earned the respect of the rest of the world for its crucial contributions to science, philosophy, literature, education, medicine, commerce, and politics - contributions that have formed and nurtured the modern West ever since. Includes an Index. "This is a great book, one which is now even more relevant than ever. It deserves to be a best seller." - Michael Barone, U.S. News & World Report, coauthor of The Almanac of American Politics ISBN: 0609606352.
Item Price
$39.20
$4.99 shipping to USA