A profile of Georges Simenon, author of the famous Maigret mystery novels. A summer-reading special from Bibliology!

Georges Simenon was born on February 13, 1903, in Liege, Belgium.  By 1919, at the age of 16, Simenon had left school and begun his writing career as a reporter for the Gazette de Liege. Legendary for a lifetime of prolific writing, his first novel was written also in 1919, although not published until 1921, under a pseudonym. By the end of 1922, he had published over 800 humorous pieces under another of his numerous pseudonyms.  My favorite Simenon pseudonym shows a bit of the author’s personal humor, the name Bruhl, an ancestor on his mother’s side, who was hanged in 1743 after a career of criminal activity spanning nearly 25 years.

In 1911, when Simenon was 8 years old, his family moved into a large house in Liege and began taking boarders, many of whom were students of different nationalities. Thus the aspiring author was introduced to stimulating conversations, especially among Russians who passionately discussed literature and other subjects in French, making it easy for young Simenon to listen in. During his time as a reporter in Liege, Simenon’s assignments exposed him to the corrupt, scandalous, and seamy side of life. He had a front-row seat on police investigations and was able to attend lectures by criminologist Edmond Locard, an important pioneer of forensic science, famous for principles of detective work.  After his father’s death in 1922, Simenon and his bride-to-be, called Tigy, left Belgium for Paris and settled into the 17th arrondissement where Simenon continued his exploration of bistros, cheap hotels, nightlife and life among working-class citizens. 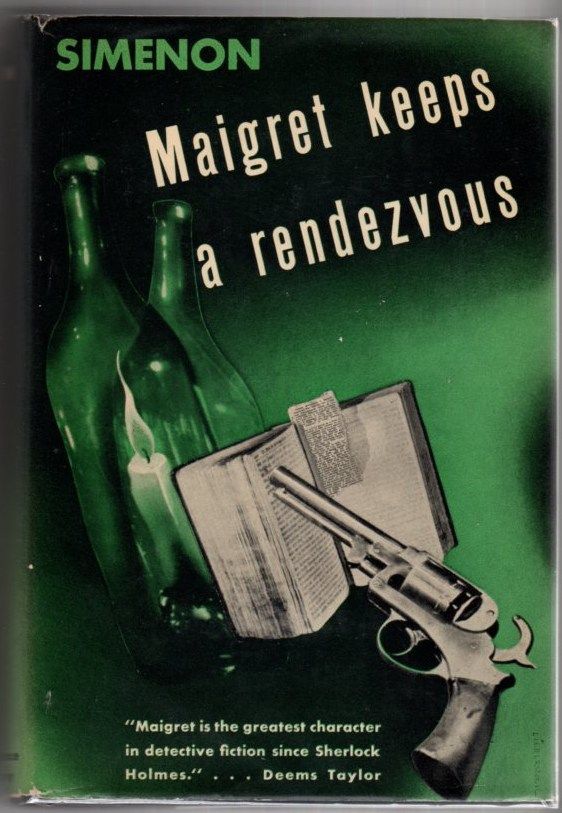 Simenon wrote hundreds of books, including pulp fiction and more serious works which he called his ‘romans durs,’ also autobiographical and other pieces. The Maigret novels alone total 75, with an additional 28 short stories. Simenon typically wrote a book within a few days, or at least in less than two weeks.

Commissaire Maigret, his most famous and popular character, was introduced in 1930. Who is Commissaire Maigret? He is a Parisian detective, or chief inspector, of solid physique. He always has a pipe in hand and wears a trilby, a fedora-style hat with a narrow brim when out of doors.  In true French-style, the chief inspector enjoys a variety of alcoholic drinks, beer being the favorite, sometimes frequently throughout a day, all the while investigating crimes with his signature brilliance. 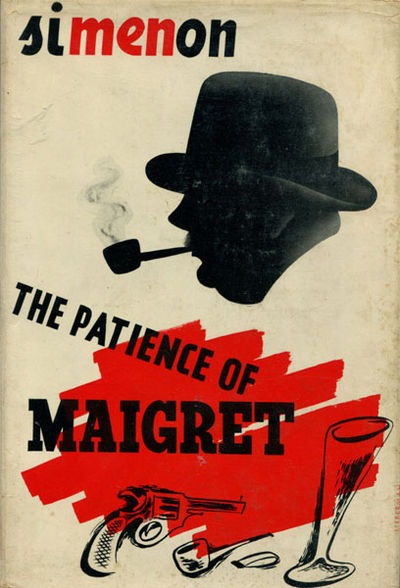 This copy is listed by BUCKINGHAM BOOKS.

Like most well-known detectives of fiction, Maigret, with his keen powers to observe both details of place and psychology of the characters, solves his mystery every time.   His approach is calm, patient, persistent, and extremely intuitive.   Notably, he is compassionate although not sentimental in the least, with a non-judgmental attitude toward his witnesses and suspects, frequently even the guilty ones.  The characters of the Maigret novels are foremost believable people.  Simenon himself said that his characters, based on real people, were the substance of his novels as opposed to plot.   Simenon wrote in French, with a very spare style, clean of multiple adjectives or flowery clauses, apparently much influenced by the writer Collette, then literary editor of the Paris paper Le Matin.  She encouraged him to simplify his style. Because of the simplicity of writing style, Simenon’s novels in their original language provide excellent reading material for students of French and wannabes of French fluency.

Maigret is sometimes identified as Simenon’s alter ego. Although the Maigrets do not have children, the Commissaire is a devoted husband who especially appreciates Madame Maigret’s excellent cooking. Simenon, on the other hand, was known for his wandering ways and openly acknowledged many affairs, including numerous casual encounters and liaisons. Although both of his marriages lasted for many years his faithfulness to his wives did not. Soon after moving to Paris, and enjoying his early financial success, Simenon could afford the luxury of a housekeeper-cook. He and his wife hired Henriette Liberge, nicknamed Boule by Simenon, and yes, “boule” is the French word for “ball.”  She was soon having an affair with Simenon and remained a presence in his life for 40 years.

Between 1945 and 1955 the Simenons lived in North America, first in Canada, then in the United States. After arriving in Canada, Simenon hired a secretary, Denyse, who soon became his lover, and later became his second wife. One of Simenon’s pleasures in life was being a father to three sons and a daughter.

Before his second marriage ended he began an affair with Therese, also hired as a housekeeper. He spoke of her as the love of his life, a love that had taken him many years to find. He died in Switzerland in 1989, where he had lived for many years with Therese.

The Maigret mysteries provide perfect summer reading —for rainy days or sunny days, in airports or on a quiet evening at home. They are easy to read, one after another, engaging, compelling, and just plain interesting, with delightful glimpses into mainly French places.  Choosing the “best” ones or favorites proves more difficult.  Readers disagree about top choices and in the end, it seems a matter of personal taste. The five I recently read were chosen by serendipity, or to be more exact because I found them at the local library.  Many of the Maigret novels are set in Paris and while four of the ones I read were set in France, only two take place in Paris, including my personal favorite of the five, The Calame Report.  I recommend starting with a few Simenon titles set in Paris or at least in France.  That said, Maigret at the Coroner’s is set in Arizona where Simenon lived for two years and I found its descriptions of Americans both acute and deliciously entertaining. I enjoyed each one of the following very much and look forward to many more.