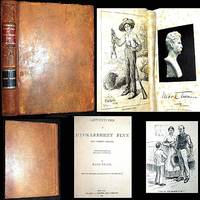 THE ADVENTURES OF HUCKLEBERRY FINN

Only 2,500 copies of this Publisher's Leather was produced, most haven't Survived!

Adventures of Huckleberry Finn is a novel by Mark Twain, first published in the United Kingdom in December 1884 and in the United States in February 1885. Commonly named among the Great American Novels, the work is among the first in major American literature to be written throughout in vernacular English, characterized by local color regionalism. It is told in the first person by Huckleberry "Huck" Finn, the narrator of two other Twain novels (Tom Sawyer Abroad and Tom Sawyer, Detective) and a friend of Tom Sawyer.

Samuel Langhorne Clemens (November 30, 1835 – April 21, 1910), better known by his pen name Mark Twain, was an American writer, humorist, entrepreneur, publisher, and lecturer. Among his novels are The Adventures of Tom Sawyer (1876) and its sequel, the Adventures of Huckleberry Finn (1885), the latter often called "The Great American Novel".

The first American edition was haphazardly assembled by the printer, and bibliographers still do not agree on whether or not there is a priority to various issue points. An estimated 20,000 copies were issued in cloth, most of them being green and about 1 in 20 issued in blue, if requested by the subscriber. Another 2500 were issued in sheepskin and 500 copies in three-quarter leather.

Condition is Good. Would handle with care, wear to edges, abrasions near edges (as usual), little glue added to top front edge to seal abrasions, re-backed with original spine strip laid down/worn strip, blemishing to first 20/30 pages then spotting here and there, most pages are good, hinges/text block are very good!

For this book, condition is better than most I've seen out there, even with faults.

Seller rating:
This seller has earned a 5 of 5 Stars rating from Biblio customers.
Biblio.com member since 2018
Boca Raton, Florida
Ask Seller a Question

re-backed
Describes a book that has had the material covering the spine replaced or joints mended.
Cloth
"Cloth-bound" generally refers to a hardcover book with cloth covering the outside of the book covers. The cloth is stretched... [More]
spine strip
The material covering the spine, or the rear portion of the outside of a book.
spine
The outer portion of a book which covers the actual binding. The spine usually faces outward when a book is placed on a shelf.... [More]
New
A new book is a book previously not circulated to a buyer. Although a new book is typically free of any faults or defects, "new"... [More]
edges
The collective of the top, fore and bottom edges of the text block of the book, being that part of the edges of the pages of a... [More]