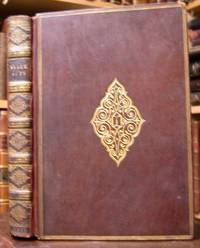 [Edinburgh: Robert Lekpreuik, 28 November, 1566., 1566. folio. ff. [14], ii-cxxii, cxxiiii-cxlv, [1], cxlvi-clviii, [2], clix-clxviii, [2], clxix-clxxxii. lacking initial blank & blank c4. woodcut title. woodcut initials. black letter. 19th century russia, gilt centre ornaments, gilt inside dentelles (joints repaired, head & foot of spine chipped, some of first few leaves apparently supplied from another copy, title cropped & repaired at corners with part of lower outer corner supplied in facsimile, marginal repairs to other prelims, occasional light soiling, light dampstaining in second part). a few old marginal notes. First Edition, variant issue, of the earliest collection of Scottish acts and statutes, compiled by James Balfour and others, and edited by Edward Henryson. The commission to compile and publish the laws, known as the ‘Black Acts’, was appointed by Queen Mary largely through the advice of John Leslie, Bishop of Ross. The work, covering the period from the accession of James I in 1424, to the current reign of Mary, 1564, is an important source for the political history of the period. Also of interest here are the early printed references to the game of golf. This copy corresponds to STC 21876, which combines elements of STC 21875 and 21876A, with cancels for folios 113, 118, 132, and 145, the latter followed by an unnumbered leaf; 2 unnumbered leaves following 158 and 168; 181 replaced by 2 leaves, including the new colophon dated 28 November; and 133 cancelled and not replaced, but with the earlier state of the title-page, line 3 ending with the word ‘the’. Aldis 51. STC 21876.. 1st Edition. Hardcover.

Seller rating:
This seller has earned a 3 of 5 Stars rating from Biblio customers.
Biblio.com member since: 2006
Toronto, Ontario
Ask Seller a Question

folio
A folio usually indicates a large book size of 15" in height or larger when used in the context of a book description....[more]
facsimile
An exact copy of an original work. In books, it refers to a copy or reproduction, as accurate as possible, of an original...[more]
First Edition
In book collecting, the first edition is the earliest published form of a book. A book may have more than one first edition in...[more]
leaves
Very generally, "leaves" refers to the pages of a book, as in the common phrase, "loose-leaf pages." A leaf is a single sheet...[more]
New
A new book is a book previously not circulated to a buyer. Although a new book is typically free of any faults or defects,...[more]
spine
The outer portion of a book which covers the actual binding. The spine usually faces outward when a book is placed on a shelf....[more]
colophon
The colophon contains information about a book's publisher, the typesetting, printer, and possibly even includes a printer's...[more]
gilt
The decorative application of gold or gold coloring to a portion of a book on the spine, edges of the text block, or an inlay in...[more]