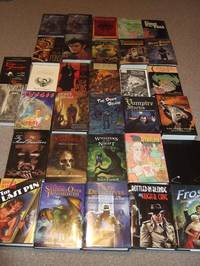 Minneapolis, Minnesota: Minneapolis, MN.: Fedogan & Bremer / F&B, 1987, 1989, 1991, 1992, 1993, 1994, 1995, 1996, 1997, 1998, 1999, 2000, 2001, 2003, 2005, 2012, 1st Edition, First Printing for All , 1994. ------------(extra shipping will be required), 35 volumes plus ephemera of various sorts, 32 are books of which 5 are softcovers as issued (2 of the softcovers are Advanced Reading copies -the other 3 are pamphlets) ---as well there is a CD of Fungi from Yuggoth /and/ a cassette (Dark Ventures) of The Case of the Whistling Room by William Hope Hodgson and Pollock and the Porroh Man by H G Wells, that leaves 27 hardcover books, all these items are Near Fine/Fine or Near Fine/Fine in Near Fine/Fine dustjackets (when a dj is called for ) -----this collection includes: Dark Ventures cassette dated 1979 (but is actually 1991 as 1979 is awfully early ) with 2 stories by Hope Hodgson and H G Wells stories, --- a limited edition of FUNGI ( 1 of 30 CD ) which was issued for the Windy City Pulp and Paperback Show in 2001; ---Colossus by Donald Wandrei (2 copies) 1st Edition, 2nd state jacket / 2nd edition which is the 1st revised and expanded edition --- The Black Death by Basil Copper --- Tales of the Lovecraft Mythos edited by Robert M. Price ---The House of the Toad by Richard L. Tierney ---The Exploits of Solar Pons by Copper ---The Early Fears by Robert Bloch ---Smoke of the Snake by Carl Jacobi ---Shadows Over Innsmouth edited by Stephen Jones ---Death Stalks the Night by Hugh B. Cave ---The Adventure of the Singular Sandwich, A Solar Pons Sampler by Basil Copper ---The Recollections of Solar Pons by Basil Copper ---Time Burial by Howard Wandrei ---Three Tales: Selections from Time Burial by Howard Wandrei (Advance Reading Copy) ---The New Lovecraft Circle edited by Robert M. Price ---Before 12:01 and After by Richard Lupoff (signed and inscribed "Buy this book from PLANET BOOKS! Yes! Richard A. Lupoff, 2001") ---Don’t Dream by Howard Wandrei ---The Door Below by Hugh B. Cave ---The Vampire Stories of R. Chetwynd-Hayes (Ronald) ---Exorcisms and Ecstasies by Karl Edward Wagner ---The Sand Dwellers by Adam Miswander ---A Coven of Vampires by Brian Lumley ---Whispers in the Night, Stories of the Mysterious and Macabre by Basil Copper ----Acolytes of Cthulhu edited by Robert Price ---Saith the Lord by Howard Wandrei (soft cover, 2 copies, variants - one is a matte black finish and one is a glossy black finish) --- The Last Pin by Howard Wandrei --- Weird Shadows Over Innsmouth edited by Stephen Jones ---Dark Detectives edited by Stephen Jones ---Bottled in Blonde by Hugh B. Cave ---Frost by Donald Wandrei --- as well there is an advanced readers copy of Don’t Dream (soft cover), ---as well there are various catalogues and mailers from Fedogan & Bremer, as well there is a John Arfstrom illustration (not original) of Robert Bloch which was used in the 100 copy limited edition, illustration is separate (no book); --- there is a signature sheet from Don’t Dream signed by Philip J. Rahman, Dennis E. Weiler, John Arfstrom, Rodger Gerberding, Helen Mary Hughesdon and D.H. Olson, ---and finally, there is the silly rubber fish that Fedogan & Bremer sent to regular customers (seems appropriate for some batrachian Lovecraft story) - oops, sorry, there is also an advertising poster for Fungi from Yuggoth, a very good example which has been glued onto a cardboard stand-up (looks like it was done by F & B), measures about 11 x 15-1/2 inches, any image directly beside this listing is the actual book and not a generic photo /// SIGNED (ONE BOOK ) ---GUARANTEED to be AVAILABLE///. Signed (see description). First Edition. Hard Cover. Near Fine (see desciption)/Near Fine (see description). Illus. by Jon Arfstrom Cover Art and Others . See Description. See Description.

NOTE: We have a 99.9% fill rate, so order with the confidence of actually having your order filled. We accept Visa, Mastercard, American Express, MONEY ORDER. Canadian residents must add 5% GST on the entire amount, including shipping. NOTE to US customers: Postage on envelopes to Canada is higher than within the United States. Please use the correct postage.

Seller rating:
This seller has earned a 5 of 5 Stars rating from Biblio customers.
Biblio.com member since 2003
Burlington, Ontario
Ask Seller a Question

fine
A book in fine condition exhibits no flaws. A fine condition book closely approaches As New condition, but may lack the... [More]
inscribed
When a book is described as being inscribed, it indicates that a short note written by the author or a previous owner has been... [More]
First Edition
In book collecting, the first edition is the earliest published form of a book. A book may have more than one first edition in... [More]
leaves
Very generally, "leaves" refers to the pages of a book, as in the common phrase, "loose-leaf pages." A leaf is a single sheet... [More]
G
Good describes the average used and worn book that has all pages or leaves present. Any defects must be noted. (as defined by AB... [More]
New
A new book is a book previously not circulated to a buyer. Although a new book is typically free of any faults or defects, "new"... [More]
jacket
Sometimes used as another term for dust jacket, a protective and often decorative wrapper, usually made of paper which wraps... [More]