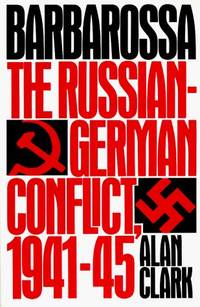 The classic account of the war on the Eastern Front between the Russians and the Germans - the greatest clash of arms the world has ever seen. Carefully researched and beautifully written, this book is a classic of military history. Alan Clark vividly narrates the course of the dramatic and brutal war between the German and Russians on the Eastern Front during the Second World War. From the invasion of Russia mounted on Midsummer's Day 1941 and the German Army's advance to the outskirts of Moscow, to the terrible turning point of Stalingrad and the eventual defeat of the Nazis at the Fall of Berlin after the hard years of fighting and advance by the Red Army, this is epic history narrated by a master.

Seller rating:
This seller has earned a 3 of 5 Stars rating from Biblio customers.
Biblio.com member since: 2010
Seneca, Pennsylvania
Ask Seller a Question

shelfwear
Minor wear resulting from a book being place on, and taken from a bookshelf, especially along the bottom edge.
trade paperback
Used to indicate any paperback book that is larger than a mass-market paperback and is often more similar in size to a hardcover...[more]
jacket
Sometimes used as another term for dust jacket, a protective and often decorative wrapper, usually made of paper which wraps...[more]