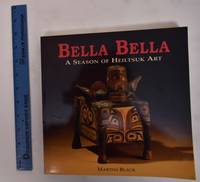 Toronto: Royal Ontario Museum, 1997. Paperback. VG- light wear and minor scuffing to wraps. Color-illustrated wraps with red, white, and black lettering. xv, 207 pp. BW and color illustrations and maps. The original Heiltsuk-speaking tribes inhabited the outer islands, protected inland waterways, and mainland fiords of the central Northwest Coast. In 1880 the Methodist Church made the Heiltsuk village of Bella Bella its base for mission work on the Northwest Coast. By the time missionary and doctor Reverend Richard W. Large arrived in 1898 the village outwardly resembled a European-style town, but Heiltsuk culture persisted. While the Heiltsuk absorbed, adapted, and appropriated aspects of Euro-Canadian culture to their needs, they also maintained their ancestral artistic traditions and spiritual ceremonies, sometimes under clandestine circumstances. Large was among the missionaries approached by museum agents to assist in the acquisition of artifacts, resulting in one of the most significant collections of Heiltsuk art in existence. Large's close association with the Heiltsuk as minister, physician, surgeon, administrator, justice of the peace, choirmaster, and teacher resulted in the uniqueness of his collection of artifacts and its documentation. His interest in folk medicine, mythology, and archaeology is evident in his published writings, which are a primary source for this study. Unlike many ethnological collectors, Large spent years in one community (1898-1910) and recorded specific, personal information. Also, as a physician and surgeon, he had power in, and access to, aboriginal society beyond that available to many missionaries. Large's collection is important to Native America art history, which has been hampered in the past by the assumption that aboriginal art is static through time, anonymous, and lacking in documentation. In its examination of the historical contextof the collection, the work is also a dynamic story of cultural clash and cultural exchange.

S&H is complicated, so please inquire for actual rates to your location if outside the US! Minimum s&h within the US $7.50, via media mail or first class if small. Discounts on shipping for multiple items. Overseas or overnight at cost +$4 supplies and handling. Items returnable with prior notice if not as described within 7 days of delivery. Items 16 pages or less not returnable at all.

Seller rating:
This seller has earned a 5 of 5 Stars rating from Biblio customers.
Biblio.com member since: 2004
Marietta, Pennsylvania
Ask Seller a Question

Specializing in Fine and Decorative Arts, Photography and Gallimaufry since 1993. Visits encouraged by appointment to see our 70,000+ volumes. Many titles not online, call with wants and needs.