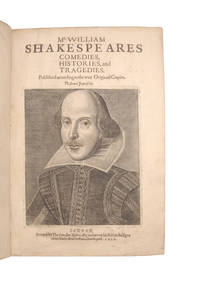 Comedies, Histories and Tragedies. Published according to the true originall copies

Comedies, Histories and Tragedies. Published according to the true originall copies

London: Tho Cotes, for Robert Allot, 1632. Folio, pp (xx) 303 (i) 232, 419 (i). Text in double column, prefatory matter single, Roman and Italic letter. Ionic head & shoulders engraved portrait of Shakespeare by Martin Droeshout on t-p in unusually fine impression (the author's best known representation), woodcut initials and headpieces. Address "To the Reader"" by Ben Jonson) inlaid on blank. Lower outer corner of first 3 ll. slightly soiled. Wine (?) stain to blank outer corner of next three, reappearing very occasionally in text, a few marginal tears and spots, light age yellowing, last leaf dusty. A very good, clean, well margined copy (taller than Pforzheimer's and the same width) in handsome late C17 calf, spine with gilt compartments, morocco label, arms of the 2nd Duke of Newcastle gilt stamped in central panel on covers, joints repaired, directions to binder on rear pastedown. (C17?) Autograph of Thomas Wright in red chalk on fore margin of t1, autograph of Edward Filmer (1717) at head of fly and address to reader, and of Viscount Mersey (1938) on fly. In folding box. A handsome and important copy of the 2nd folio edition of Shakespeare's plays in the first variant issue and the second authoritative version of the Shakespearian canon. Published 16 years after the authors death it differs very significantly from the quartos and is largely reproduced from the first fol.(1623). It is from this version of the text that all modern versions derive. Were one asked to nominate the two most important works in the English language, culturally, historically and linguistically the Shakespeare folio and the King James Bible would be the obvious choices. As Printing and the Mind of Man 122 (on the first folio) puts it "the magic of Shakespeare's poetry is potent only in his own tongue; but the great theatrical scenes, the great dramatic figures are universal. Hamlet's doubts, the doomed love of Romeo and Juliet, Brutus' dilemma, the Falstafian image, the characters of Jago, Petruchio and Lady Macbeth are part of the fabric of western (and not only western) civilisation….they are more real to us than the history books."This edition is also notable as containing the first appearance in print of any work of John Milton's - his prophetic 16 line epitaph on the author that his great lasting monument will "not a starre-y pointing pyramid"" but his ""unvalued book"".A very nice association copy. Filmer was a playwright and author whose tragedy "The Unnatural Brother" was first performed at the theatre in Little Lincoln's Inn Fields, a place well known to Shakespeare, whom Filmer much admired. When Collier attacked the English stage (including Shakespeare) in print, Filmer defended both in a sensible and well written treatise entitled "The Defence of Plays or the Stage Vindicated" (1707) to which Collier was compelled to reply. It was one of the first significant literary controversies immortalised in print. Henry Clinton 2nd Duke of Newcastle (1720-1744) was one of the great Whig magnates of his day. Though he played no direct part in politics his huge influence in so many parliamentary constituencies meant his political support could not be ignored. For his cousin Sir Henry Clinton he procured the ill fated command of the British forces in North America during the Revolution. At Clumber in Nottinghamshire he created one of the most beautiful parks in England. The house there was demolished in 1938 and the present volume sold from the splendid library the previous year alond with a great Audubon "America" and the Lamoignan Hours. Viscount Mersey formed a remarkable collection of important early books during the mid c.20. Every volume was chosen with care and he recognised the importance of original condition with appropriate binding long before that became common. STC 22274 a. Pforzheimer III 906. PMM 122 (1st). Greg III pp1113-1116. Todd vol V (1952) pp81-108

• Books will be sent after your cheque or bank transfer has been received.
• Postage and insurance are charged on all parcels unless otherwise specified.
• Payment is due within 14 days of the invoice date.
• If payment is to be made in a currency other than pounds sterling, please add €15 or $15 to cover bank transfers.
• All books remain our property until paid for in full. We reserve the right to charge interest on outstanding invoices at our discretion.

Seller rating:
This seller has earned a 5 of 5 Stars rating from Biblio customers.
Biblio.com member since: 2020
London, London
Ask Seller a Question

We are specialists in English STC books (printed before 1640), Continental printed books before and up to the mid 1600s and medieval and renaissance manuscripts, both decorative and textual.

calf
Calf or calf hide is a common form of leather binding.  Calf binding is naturally a light brown but there are ways to treat...[more]
fine
A book in fine condition exhibits no flaws. A fine condition book closely approaches As New condition, but may lack the...[more]
soiled
Generally refers to minor discoloration or staining.
folio
A folio usually indicates a large book size of 15" in height or larger when used in the context of a book description....[more]
Association copy
An association copy is a copy of a book which has been signed and inscribed by the author for a personal friend,...[more]
spine
The outer portion of a book which covers the actual binding. The spine usually faces outward when a book is placed on a shelf....[more]
gilt
The decorative application of gold or gold coloring to a portion of a book on the spine, edges of the text block, or an inlay in...[more]
morocco
Morocco is a style of leather book binding that is usually made with goatskin, as it is durable and easy to dye. (see also...[more]