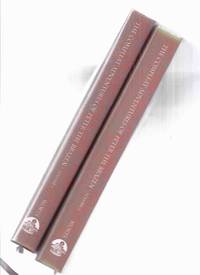 Ontario: Shelburne, ON / Sauk City, WI: The Battered Silicon Dispatch Box, 2003, 1st Editions, First Printing, 2003. -----------2 volumes (ONE SHIPPING PRICE ), hardcovers, overseas shipping (anywhere outside of Canada and the USA ) will require additional charges, about 8.5w x 11.25h inches, both are Fine copies in Fine dustjackets, a wee bit of sunning along the upper edge of the jacket of volume 2, both in uniform format, ribbon markers, map endpapers, 802 pages, reprints the original pulp covers in b&w, these contain: Princess of Static; The City of Stolen Lives; The Bitter Fountain; The Dead Spark; The Golden paw; The Gray Dragon; The Golden cat; The Sapphire Smile; The Man in the Jade Mask; That cargo of Opium; The Hand of Ung; Vampire; Chinese for racket; Cave of the Blue Scorpion; Sting of the Blue Scorpion; The Master Magician; The Sapphire Death; The Octopus of Hong Kong; Kingdom of the Lost; Over the Dragon Wall, --as well there are some essays by Lai - The Inconsistencies / The Chronology / Peter the Brazen vs Fu Manchu ---and an intro by Weinberg - The Lost treasures from the Pulps, No. 1 and an essay by Worts - Adventures of a Wireless Free-Lance, a Thrill That came Thrice in a Night-Time ---and an autobiography by Worts (one page ), ---For approximately half a century, from the earliest days of the 1900's till the mid-1950's, the pulp magazines served as a source of inexpensive and entertaining fiction for the American reading public. Though the pulps are mostly forgotten today, more than a thousand different pulp titles were printed, and over 50,000 individual issues appeared. The most popular pulps were published weekly and oftentimes sold over 500,000 copies per issue. Literally thousands of hardcover books reprinted pulp stories and hundreds of movies were based on pulp fiction. --The pulp field died in the early 1950's, with only a few titles lasting to the later years of that decade. Most genre literature, ranging from westerns to mysteries to science fiction, had already made the jump to digests, slick magazines, or paperback. What didn't survive were mid-length works, novelets and short novels, the bread and butter of pulp magazines, stories too long to be considered a short and too short to be published as a novel. And with them disappeared most series stories featuring continued characters. There was no room in the world of paperback originals for the pulp heroes who filled the pages of Argosy, Adventure, Dime Detective, Wild West Weekly and many other fine magazines. They've been lost from sight—until now. --Lost Treasures of the Pulps is a new series of hardcover books collecting some of the great series stories that have never been reprinted from the pulp magazines. This first set of two volumes reprints the entire Peter the Brazen series by George F. Worts, occasionally writing under his own name and also under the pen name, Loring Brent. There were two series of Peter the Brazen stories written. The first appeared in Argosy in 1919-1920, while the second series appeared in the same magazine from 1930-1935. The second series of adventures is considered by many pulp fans as perhaps the greatest action series ever to be published in the pulps. In particular, the three stories detailing Peter's battles with the Chinese mastermind, the Blue Scorpion, are pulp adventures at their finest. Written by George F. Worts, one of the finest adventure writers of the 20th century, these stories are just as exciting and entertaining as they were when first published. --George F. Worts was an extremely popular pulp magazine writer known not only for this series but also for his Singapore Sammy stories and Gillian Hazeltine mystery novels. Worts, who was born in Ohio on March 6, 1892 was a successful author, businessman and editor. When he was still a young man, he worked as a ship's radio operator much like his character, Peter the Brazen. After living most of his life on the East Coast, Worts moved to Hawaii where he died in 1967.---,any image directly beside this listing is the actual book and not a generic photo ///NOT SIGNED ---GUARANTEED to be AVAILABLE///. First Edition. Hard Cover. Fine (see description)/Fine (see description). Illus. by Pulp Cover Art. 8.5w x 11.25h Inches. Flaps Not Clipped.

Pulp magazines
Magazines published primarily in the 20th Century named for the cheaply produced wood pulp paper on which they were printed....[more]
New
A new book is a book previously not circulated to a buyer. Although a new book is typically free of any faults or defects,...[more]
fine
A book in fine condition exhibits no flaws. A fine condition book closely approaches As New condition, but may lack the...[more]
First Edition
In book collecting, the first edition is the earliest published form of a book. A book may have more than one first edition in...[more]
flap(s)
The portion of a book cover or cover jacket that folds into the book from front to back.  The flap can contain biographical...[more]
jacket
Sometimes used as another term for dust jacket, a protective and often decorative wrapper, usually made of paper which wraps...[more]