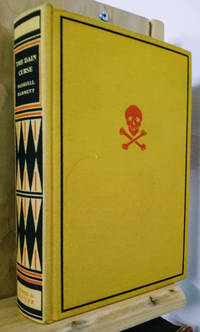 Dashiell Samuel Hammett was born in St. Mary’s County. He grew up in Philadelphia and Baltimore. Hammett left school at the age of fourteen and held several kinds of jobs thereafter—messenger boy, newsboy, clerk, operator, and stevedore, finally becoming an operative for Pinkerton’s Detective Agency. Sleuthing suited young Hammett, but World War I intervened, interrupting his work and injuring his health. When Sergeant Hammett was discharged from the last of several hospitals, he resumed detective work. He soon turned to writing, and in the late 1920s Hammett became the unquestioned master of detective-story fiction in America. In The Maltese Falcon (1930) he first introduced his famous private eye, Sam Spade. The Thin Man (1932) offered another immortal sleuth, Nick Charles. Red Harvest (1929), The Dain Curse (1929), and The Glass Key (1931) are among his most successful novels. During World War II, Hammett again served as sergeant in the Army, this time for more than two years, most of which he spent in the Aleutians. Hammett’s later life was marked in part by ill health, alcoholism, a period of imprisonment related to his alleged membership in the Communist Party, and by his long-time companion, the author Lillian Hellman, with whom he had a very volatile relationship. His attempt at autobiographical fiction survives in the story “Tulip,” which is contained in the posthumous collection The Big Knockover (1966, edited by Lillian Hellman). Another volume of his stories, The Continental Op (1974, edited by Stephen Marcus), introduced the final Hammett character: the “Op,” a nameless detective (or “operative”) who displays little of his personality, making him a classic tough guy in the hard-boiled mold—a bit like Hammett himself.

We are happy to provide a refund within thirty days of the customer's receipt of any book(s) upon return of the book(s) to our shop.

Seller rating:
This seller has earned a 5 of 5 Stars rating from Biblio customers.
Biblio.com member since 2005
Selkirk, New York
Ask Seller a Question

Old Saratoga Books owners Dan and Rachel Jagareski have been selling books since 1996. After running an open shop for twenty years in the historic village of Schuylerville we now sell books online and at book fairs. We are members of the Independent Online Booksellers Association (IOBA). Our specialties include books about history, science, cooking, children's books, and the arts. Rachel is a graduate of the Colorado Antiquarian Book Seminar and has attended Rare Book School in Charlottesville, Virginia.

Cloth
"Cloth-bound" generally refers to a hardcover book with cloth covering the outside of the book covers. The cloth is stretched... [More]
bookplate
Highly sought after by some collectors, a book plate is an inscribed or decorative device that identifies the owner, or former... [More]
cocked
Refers to a state where the spine of a book is lightly "twisted" in such a way that the front and rear boards of a book do not... [More]
spine
The outer portion of a book which covers the actual binding. The spine usually faces outward when a book is placed on a shelf.... [More]
sunned
Damage done to a book cover or dust jacket caused by exposure to direct sunlight. Very strong fluorescent light can cause slight... [More]