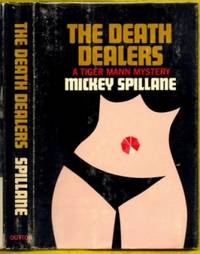 Mickey Spillane (born March 9, 1918, Brooklyn, N.Y., U.S. - died July 17, 2006, Murrells Inlet, S.C.) U.S. writer of pulp detective fiction. His first novel, I, The Jury (1947), introduced the detective Mike Hammer, who later appeared in a series of works, including My Gun Is Quick (1950) and Black Alley (1996). Several of his Mike Hammer novels were adapted for film, most notably Kiss Me, Deadly (1952; film 1955). His other novels, all characterized by violence and sexual licentiousness, include The Deep (1961) and Day of the Guns (1964), which began a series centered on the international agent Tiger Mann. Spillane claimed to write solely for monetary gain and flouted literary taste with recurring elements of sadism that disturbed some readers, but the captivating vigor of his narrative and of his central characters brought him popular success.

The American government is courting the visiting ruler for reasons of oil. The Communists want the king, too - but they'd prefer him dead. So Tiger has to outwit the principal Far East Communist agent, counteract Communist propaganda being fed to the king, entertain the monarch's beautiful fiancé ... and still keep his lovely Rondine happy.

spine
The outer portion of a book which covers the actual binding. The spine usually faces outward when a book is placed on a shelf....[more]
Cloth
"Cloth-bound" generally refers to a hardcover book with cloth covering the outside of the book covers. The cloth is stretched...[more]
octavo
Another of the terms referring to page or book size, octavo refers to a standard printer's sheet folded four times, producing...[more]
jacket
Sometimes used as another term for dust jacket, a protective and often decorative wrapper, usually made of paper which wraps...[more]
edges
The collective of the top, fore and bottom edges of the text block of the book, being that part of the edges of the pages of a...[more]
First Edition
In book collecting, the first edition is the earliest published form of a book. A book may have more than one first edition in...[more]