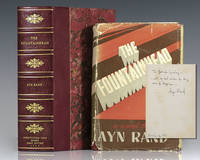 Indianapolis: Bobbs-Merrill Company, 1943. First edition, first issue with first edition stated on the copyright page of the author's first major novel, as well as her first best-seller. Octavo, original red cloth. Association copy, inscribed by the author in the year of publication on the front free endpaper, "To Gertrude Lynneberg- - with my best wishes for long years of happiness- Ayn Rand November 16, 1943." The recipient, Gertrude Lynneberg was the sister-in- law to Linda Lynneberg, also known as Aslaug Lynneberg, a lifelong friend of Rand. Near fine in a very good first issue dust jacket with some chips and wear. Housed in a custom half morocco clamshell box. First editions in the original dust jacket are uncommon, association copies rare. Although Rand was a previously published novelist and had a successful Broadway play, she faced difficulty in finding a publisher she thought right for The Fountainhead. She let Macmillian Publishing go when they rejected her demand for better publicity (Branden, 1986), and when her agent criticized the novel, she fired him and handled submissions herself (Burns, 2009). After sifting through eleven more publishers, Rand finally released The Fountainhead with Bobbs-Merrill Company in 1943. The reception was instant, and The Fountainhead became a bestseller in two years. The protagonist, Howard Roark, whose character was thought to be inspired by Frank Lloyd Wright, is a young architect fighting against convention. Cited by numerous architects as an inspiration, Ayn Rand said the theme of the book was "individualism versus collectivism, not within politics but within a man's soul." Rand chose architecture as the analogy of her heady themes because of the context of the ascent of modern architecture. It provided an appropriate mode to make relevant her beliefs that the individual is of supreme value, the "fountainhead" of creativity, and that selfishness, properly understood as ethical egoism, is a virtue. Some critics consider The Fountainhead to be Rand's best novel (Merill, 1991). Indeed, philosopher Mark Kingwell described it as "Rand's best work" (Kingwell, 2006). In 1949 it was adapted to film, produced by Henry Blanke, directed by King Vidor, starring Gary Cooper, Patricia Neal, Raymond Massey, Robert Douglas, and Kent Smith.

clamshell box
A protective box designed for storing and preserving a bound book or loose sheets. A clamshell box is hinged on one side, with... [More]
jacket
Sometimes used as another term for dust jacket, a protective and often decorative wrapper, usually made of paper which wraps... [More]
fine
A book in fine condition exhibits no flaws. A fine condition book closely approaches As New condition, but may lack the... [More]
Association copy
An association copy is a copy of a book which has been signed and inscribed by the author for a personal friend,... [More]
Cloth
"Cloth-bound" generally refers to a hardcover book with cloth covering the outside of the book covers. The cloth is stretched... [More]
First Edition
In book collecting, the first edition is the earliest published form of a book. A book may have more than one first edition in... [More]
morocco
Morocco is a style of leather book binding that is usually made with goatskin, as it is durable and easy to dye. (see also... [More]
Copyright page
The page in a book that describes the lineage of that book, typically including the book's author, publisher, date of... [More]
octavo
Another of the terms referring to page or book size, octavo refers to a standard printer's sheet folded four times, producing... [More]
inscribed
When a book is described as being inscribed, it indicates that a short note written by the author or a previous owner has... [More]