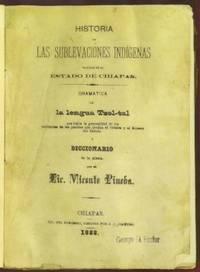 Tzeltal is a member of the Mayan family of languages and is spoken mainly in the State of Chiapas, Mexico. Some of the earliest written documents in Tzeltal are Fray Domingo de Ara's Vocabulario de Lengua Tzeldal Según el Orden de Copanabastla, which is believed to have been written in 1571, and Manuel Díez's 1675 work, Conciones en Lingua Tzeldaica. There are currently at least six different dialects of Tzeltal spoken in Chiapas: Northern (Ocosingo, Bachajon) , West Central (Tenejapa, Cancuc), East Central (Oxchuc, Chanal, Amatenango), Southern (Aguacatenango, Villa las Rosas, Teopisca), South Western (Copanaguastla [extinct], Comitan), and the nearly extinct South Eastern (Trinitaria, Lagos de Montebello). However, this classification scheme is partial at best - each town where Tzeltal is spoken in the highlands of Chiapas has significant dialectical variation, with some towns even having two or more "sub-dialects" spoken within town boundaries. Vincente Pineda's work includes both the grammar and dictionary of the Tzeltal.

Seller rating:
This seller has earned a 4 of 5 Stars rating from Biblio customers.
Biblio.com member since 2005
Fort Worth, Texas
Ask Seller a Question

octavo
Another of the terms referring to page or book size, octavo refers to a standard printer's sheet folded four times, producing... [More]
gilt
The decorative application of gold or gold coloring to a portion of a book on the spine, edges of the text block, or an inlay in... [More]
soiled
Generally refers to minor discoloration or staining.
Cloth
"Cloth-bound" generally refers to a hardcover book with cloth covering the outside of the book covers. The cloth is stretched... [More]
edges
The collective of the top, fore and bottom edges of the text block of the book, being that part of the edges of the pages of a... [More]
First Edition
In book collecting, the first edition is the earliest published form of a book. A book may have more than one first edition in... [More]
spine
The outer portion of a book which covers the actual binding. The spine usually faces outward when a book is placed on a shelf.... [More]