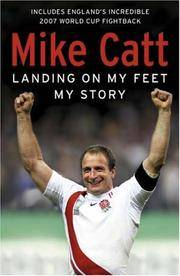 LANDING ON MY FEET - MY STORY. [Author SIGNED copy.]

LANDING ON MY FEET - MY STORY. [Author SIGNED copy.]

UK,8vo HB+dw/dj,SIGNED,1st edn,2nd imp.NFINE/NFINE.No owner inscrptn,but author's dedicated signature:'To Roger Best Wishes Mike Catt' to title page,and no price-clip to dw/dj.Bright, crisp,clean,subject colour photographic illustrated dw/dj; with
negligible shelf-wear and creasing to edges and corners - no nicks or tears present.Top+fore-edges bright and clean; contents bright,tight and clean.Bright, clean,sharp-cornered, publisher's original, plain black cloth bds with bright,crisp, stamped white ink letters to spine/backstrip and immaculate plain white eps. UK,8vo HB+dw/dj,vii-xivpp+1-354pp [paginated] includes acknowledgements, photographic acknowledgements, an introduction,17 chapters,32pp contemporary colour photographs in 4 blocks of 8pp apiece between pp82/3,pp146/7,pp194/5 and pp258/9 respectively,career record,an index,plus [unpaginated] half-title,SIGNED+dedicated title page and contents list/table.
On 20 October 2007,Mike Catt MBE made history by becoming the oldest player to appear in a Rugby World Cup final.It was also to be his last game for England in an international career stretching back 75 caps and 14 years.
The occasion completed an extraordinary renaissance for the 36-year-old whose international career had appeared to be over after he helped England win the 2003 World Cup in Australia. Earlier in 2007 he was not only recalled but appointed England captain by head coach Brian Ashton.For a player famously run over by Jonah Lomu in the 1995 World Cup and booed by England supporters at Twickenham in the late 1990's,it was a remarkable comeback.
Born in South Africa into a family of sports-obsessed brothers, Catt cut his teeth playing for Eastern Province.Frustrated at his lack of playing opportunities he came to England aged 21 where he signed for Bath after Gloucester had not answered his telephone call.
There he came into contact with many Red Rose greats, including Jerry Guscott,Phil de Glanville and Stuart Barnes. Together they were the golden boys of English rugby,playing hard off the field as well as on it,and winning many trophies along the way - including the Heineken Cup in 1998.
Catt has been dropped and re-selected by England more times than he can remember.He won a Grand Slam in the 1995 Five Nations Championship,and eight years later he kicked the ball into touch to bring an end to the unforgettable 2003 World Cup final win over Australia.
In 'Landing on My Feet' Catt gives unprecedented access to his personal highs and lows - his joy at getting married to his fiance Ali,and the subsequent trauma of nearly losing her and his daughter Evie in post-birth complications - and takes a look at the glorious highlights and the difficult setbacks of his professional career.
'Landing on My Feet' is a refreshingly honest and personal look at fourteen years at the top of international and club rugby,from one of the most distinguished and respected players in the game.
Since April 2013,again in March 2015,and in this year too,the UK Post Office has altered it's Pricing in Proportion template, altering its prices,weight allowances,dimensions and lowered its compensation rates too! So,please contact rpaxtonden@bkueyonder.co.ujk ,because of the weight/value of this item,for correct,insured shipping/P+p quotes - particularly ALL overseas buyers - BEFORE ordering through the order page!

edges
The collective of the top, fore and bottom edges of the text block of the book, being that part of the edges of the pages of a...[more]
crisp
A term often used to indicate a book's new-like condition. Indicates that the hinges are not loosened. A book described as crisp...[more]
Cloth
"Cloth-bound" generally refers to a hardcover book with cloth covering the outside of the book covers. The cloth is stretched...[more]
title page
A page at the front of a book which may contain the title of the book, any subtitles, the authors, contributors, editors, the...[more]
bds
Common term for the covers of a hardbound book.  The term 'boards' refers to the thick cardboard under the paper or cloth...[more]