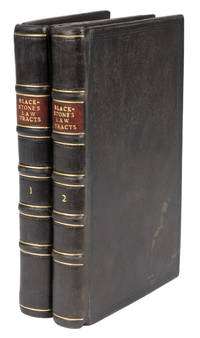 1762. Oxford, 1762. 1st ed.. Oxford, 1762. 1st ed. First Edition of Blackstone's Law Tracts Blackstone, Sir William [1723-1780]. Law Tracts, In Two Volumes. Oxford: At the Clarendon Press, 1762. Two volumes. [iv], 257, [7]; [iv], cxv, [5], 135, [9] pp. 4 parts, each with divisional title page. 8 copperplate facsimiles (of royal seals), copperplate Table of Descents and folding Table of Consanguinity. Octavo (8" x 5"). Recent period-style calf, blind rules to boards, gilt-edged raised bands, blind fillets, lettering pieces and gilt volume numbers to spines, endpapers renewed. Light toning to text, slightly heavier in places, light soiling to a few leaves in each volume, light soiling and a few creases to Table of Descents, minor wormtrack to final leaves and pastedown of Volume II. $2,400. * First edition. The first collected edition, with revisions, of five early works, several of which are quite rare in their original editions. They are reprinted here "with a few corrections and additions"; each of the volumes contains a general index. The works are, Volume I: An Essay on Collateral Consanguinity (1750, Blackstone's first legal publication), Considerations on Copyholders (1758), Treatise on the Law of Descents in Fee-Simple (1759), Volume II: The Great Charter (1759) and Magna Carta, Carta de Forest, Etc. (1759). A "third" edition was published in 1771. (There is no evidence of a second edition, unless one counts the pirated Dublin reissue of the first, which was printed in 1767.) The contents of the two editions differ. The first does not have Analysis of the Laws of England (1756) or Observations on the Oxford Press (1757); the "third" does not have Treatise on the Law of Descents in Fee-Simple. Eller, The William Blackstone Collection in the Yale Law Library 238. Laeuchli, A Bibliographical Catalog of William Blackstone 551.

raised band(s)
Raised bands refer to the ridges that protrude slightly from the spine on leather bound books.  The bands are created... [More]
calf
Calf or calf hide is a common form of leather binding.  Calf binding is naturally a light brown but there are ways to treat... [More]
octavo
Another of the terms referring to page or book size, octavo refers to a standard printer's sheet folded four times, producing... [More]
title page
A page at the front of a book which may contain the title of the book, any subtitles, the authors, contributors, editors, the... [More]
leaves
Very generally, "leaves" refers to the pages of a book, as in the common phrase, "loose-leaf pages." A leaf is a single sheet... [More]
First Edition
In book collecting, the first edition is the earliest published form of a book. A book may have more than one first edition in... [More]
gilt
The decorative application of gold or gold coloring to a portion of a book on the spine, edges of the text block, or an inlay in... [More]