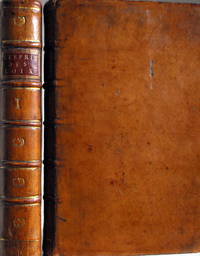 A Edinbourg, Chez G. Hamilton & J. Balfour, 1750. FIRST SCOTTISH EDITION. 2 volumes. 8vo (in 4s), 198 x 112 mms., pp. xxviii, 458 [459 errata, 460 blank]; xvii [xviii errata], 487 [488 blank], contemporary lightly polished, spine gilt in compartments with curious ichthyological ornament (sort of a sea creature or mermaid with its tail curved towards its head), red leather label; very slight rubbing of joints, but a fine set, with the later bookplate of Sir James Miller Bart of Manderston, probably the racehorse owner (1864 - 1906). Hamilton and Balfour had published a few minor French works in translation before 1750, but this was their first full-length publication in French. They issued subscription proposals for this edition, claiming, not unusually for 18th century publishers, that their edition would be more correct than those published in London and Geneva, where it was first published in 1748. The subscription proposals were announced in the Caledonian Mercury on 1 June 1749: "As the publishers of this work are to spare neither Expence nor Pains, in having it elegantly printed, and carefully corrected from the Errors both of the Geneva and London Editions, and at as cheap, if not a cheaper Price than either: It is hoped that all Lovers of Learning, and Well-wishers to their Country, will rather chuse to encourage this first Attempt of reprinting a valuable foreign Book among ourselves, than any other Edition...." One of those who expressed enthusiasm for the project was David Hume, who let Montesquieu know what was happening. Montesquieu sent Hume many corrections, which Hume passed on to the publishers, when the work was almost completed. Four leaves in each volume were cancelled and replaced with new leaves, though errors still remained. Hamilton and Balfour later issued an English translation of the two chapters most likely to interest British readers, Two Chapters of A celebrated French work, Intitled, De l'Esprit des Loix, Translated into English, one, Treating Of the Constitution of England; another, Of the Character and Manners which result from this Constitution. Hamilton and Balfour offered this for 10s. sewed, or 12s bound, and this appears to be a publisher's binding. ESTC T121684 locates 11 copies in UK libraries, one in Europe, one in Australia, and UCLA, Kansas, Penn, and Trinity College in North America.

Payment by cheque, credit card, cash. New customers will be invoiced pro forma. Books may be returned within two weeks for any reason; refund within 1 month for any reason; negotiable after that, but no returns after one year.

Seller rating:
This seller has earned a 5 of 5 Stars rating from Biblio customers.
Biblio.com member since 2006
LONDON
Ask Seller a Question

I work from home, but I am happy to see customers at almost any time by appointment.

G
Good describes the average used and worn book that has all pages or leaves present. Any defects must be noted. (as defined by AB... [More]
rubbing
Abrasion or wear to the surface. Usually used in reference to a book's boards or dust-jacket.
spine
The outer portion of a book which covers the actual binding. The spine usually faces outward when a book is placed on a shelf.... [More]
New
A new book is a book previously not circulated to a buyer. Although a new book is typically free of any faults or defects, "new"... [More]
fine
A book in fine condition exhibits no flaws. A fine condition book closely approaches As New condition, but may lack the... [More]
errata
Errata: aka Errata Slip A piece of paper either laid in to the book correcting errors found in the printed text after being... [More]
tail
The heel of the spine.
leaves
Very generally, "leaves" refers to the pages of a book, as in the common phrase, "loose-leaf pages." A leaf is a single sheet... [More]
gilt
The decorative application of gold or gold coloring to a portion of a book on the spine, edges of the text block, or an inlay in... [More]
bookplate
Highly sought after by some collectors, a book plate is an inscribed or decorative device that identifies the owner, or former... [More]