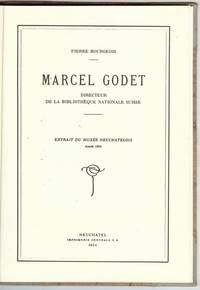 No copies of this small but nicely bound book are found for sale. OCLC only shows five libraries worldwide having copies of this book. Signed by the Author, Pierre Bourgeois to Milton Lord, who became the Boston Public Library head. written in French and in near perfect as printed and bound condition. Some slight toning and sunnint along the cloth spine on the front board with some minor bumps. Otherwise, interior is clean, bright and in excellent condition. A very rare publication about the head of the National Swiss library and his life. OCLC is as follows:

MILTON E. LORD
Director of Libraries
September 1930 – January 1932
Milton Lord began a career in engineering at Harvard, but became interested in library work after serving as a part-time assistant in the library; he also acted as librarian of Harvard Union in Cambridge. Lord then spent a year at the Ecole des Sciences Politiques in Paris and four years in Italy as librarian of the American Academy in Rome, where he assisted in the re-cataloging of the Vatican Library. Lord came to Iowa to assume the post of professor and director of university libraries and of the library school. Here he had the novel idea of creating recreational reading rooms that were comfortably furnished. Lord also instituted improvements in the circulation system, such as improving the system of charging out books. Lord left Iowa to become Director of the Boston Public Library, where he stayed until his retirement in 1965.Retrospective view The period from 1909 to 1945, during Marcel Godet's tenure as Director of the Swiss National Library, was decisive for the constitution of special collections at the NL. During this period, the NL acquired an important part of these collections referred to today as Special collections. Noteworthy is the contribution of Karl Jakob Lüthi, doctor honoris causa from Bern University's Faculty of Theology and fellow worker at the NL from 1909 to 1941. It is during the "Marcel Godet / Karl J. Lüthi" period, that the NL became the depository of the censured documents from the First and Second World Wars, of the Libraries of the Swiss Gutenberg Museum and of the Swiss Society for genealogical studies as well as the depository of the archives of the Schweizerisches Grütliverein, of the New Helvetic Society and of the Silbernagel-Caloyanni Collection and of an interesting collection of newspapers relative to the First World War and the Society of Nations.Book Description: 1954. Hard Cover. Book Condition: Very Good+. No Jacket. B/W Photo-illustration of Marcel Godet (illustrator). First Edition. Just Over Ten Inches Tall. Inscribed and Signed by author Pierre Bourgeois at top of front free endpaper. Brief inscription says: -- To Milton Lord with kindest regards, Pierre Bourgeois. -- Hardcover, first edition. Cloth spine and corners, with paper-covered boards bearing paper title/author label on front. 23 pages. Text in French. VG+ (spine cloth wraps onto front and rear boards for approximately an inch and a half, and these areas have light foxing, as do cloth corner tips; thin spine is clean, also unlettered)/ No dj, maybe not issued in dj. Inscribed and Signed By Author.

inscribed
When a book is described as being inscribed, it indicates that a short note written by the author or a previous owner has...[more]
spine
The outer portion of a book which covers the actual binding. The spine usually faces outward when a book is placed on a shelf....[more]
Cloth
"Cloth-bound" generally refers to a hardcover book with cloth covering the outside of the book covers. The cloth is stretched...[more]
First Edition
In book collecting, the first edition is the earliest published form of a book. A book may have more than one first edition in...[more]
New
A new book is a book previously not circulated to a buyer. Although a new book is typically free of any faults or defects,...[more]
jacket
Sometimes used as another term for dust jacket, a protective and often decorative wrapper, usually made of paper which wraps...[more]
good+
A term used to denote a condition a slight grade better than Good.
Bumps
Indicates that the affected part of the book has been impacted in such a way so as to cause a flattening, indention, or light...[more]