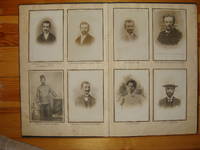 İn original decorative dark green binding with the Toghra (arm) of the Sultan Abdul Hamid II and the Ottoman cresent. Dedicated and signed by a possible member of the commity in 21-11-1321 (21-11-1905). With 14 plates in the end contain 34 original photographs of the accused people, equipments and explosive materials used in the assassination attempt. Ex-libris Ertugrul Zekai Okte. Armenians who were not able to get the desired results from their protests in Istanbul in 1895 and 1896 attempted to draw the attention of big powers by assassinating Abdulhamid II and carrying out big protests, and in this way, reach their goals by weakening the Ottoman Empire. Within this framework, it was decided to start intensive activities in Istanbul and İzmir in the Dashnaksutyun congress carried out in Sofia in January of 1904. According to this, the Sultan would be assassinated and then the government centre, Galata Bridge, Tunnel, Ottoman Bank, foreign embassies and some other private and official institutions would be blown up. Therefore, a great unrest and revolution would be created and Istanbul would be left in blood and fire and then the intervention of the European countries would be ensured. The Armenian defenders started their preparations in the light of these decisions. The most significant role among the intriguers was played by the Russian Armenian Samuel Fain (Kristafor Mikaelyan), his daughter Robina Fain, and Lipa Rips (Konstantin Kabulyan). These made connection with the Belgian Edward Jorris who had an anarchist spirit. The assassins started to follow the actions of Abdulhamid II. They decided on Friday when the Sultan went to the Yıldız Mosque and the official ceremony was held as the most appropriate time for the action. According to their detections, the arrival of the Sultan to his cart and move after the prayers was taking 1 minute and 42 seconds. As for the plan they made within this framework, a cart where a time bomb was placed would be brought near the mosque and the time bomb would blow just when the Sultan was passing by that spot. The Armenian assassins came to the Yıldız Mosque with their cars on 21 July 1905 Friday as they had planned. When the prayers were over they activated the time bomb. However, at the end of the prayers Sheikh ul-Islam Cemaleddin Efendi came to the Sultan. They had some quick words. In the meantime, before the Sultan got in the cart, the time bomb, which had been set already, blew up creating a huge noise outside the mosque. The Sultan, who was coincidentally kept busy by Sheikh ul-Islam, was saved from the assassination. However, many people around the exploded cart died and were injured. According to the statement of Tahsin Bey, the First Secretary of the Palace, the Sultan demonstrated a great example of courage (Tahsin Pasha 1990, p. 158). Abdulhamid II shouted, “Don’t be afraid, don’t be afraid” to be able to calm down the panic. Those who saw his calm state of condition, soldiers and officers immediately got back to their places. The Sultan got in his cart saying, “Don’t worry. Don’t let anybody get injured by the confluence.” He took the law in his hands. He started to climb the hill by using the cart more slowly than before. In the meantime, the Austrian ambassador was shouting “Vive le Sultan – Long Live the Sultan” (Osmanoğlu 1986, p. 59). This assassination arranged by Armenians for Sultan Abdulhamid was announced in the newspapers the following day (Tercüman-ı Hakikat, 19 Cemaziyelevvel 1323). In the meantime, big reactions came from both inside the country and outside of the county. Many Ottoman citizens condemned the attack against the Sultan. All kings and presidents of the time sent their telegraphs of good wishes to the palace and stated that they condemned the event. The first report on the assassination was prepared by Beşiktaş Police Commandership. (From an article by Dr. Vahdettin Engin)