Home Michael Treloar Antiquarian Booksellers Travels in the South of Europe and Brazil, with a Voyage up the Amazon and the Xingu' [sic]. Translated by Sir… 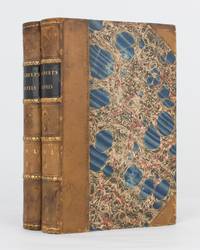 Travels in the South of Europe and Brazil, with a Voyage up the Amazon and the Xingu' [sic]. Translated by Sir Robert H. Schomburgk and John Francis Taylor

Travels in the South of Europe and Brazil, with a Voyage up the Amazon and the Xingu' [sic]. Translated by Sir Robert H. Schomburgk and John Francis Taylor

by ADALBERT, Prince of Prussia

London: David Bogue, 1849. First Edition. Hardcover. Very Good. London, David Bogue, 1849 [first edition in English]. Octavo, two volumes, xvi, 338, and vi, 378 pages plus a frontispiece (in the first volume) and 3 small folding maps (all with a little hand-colouring). Early half calf and marbled papered boards, with all edges marbled and matching marbled endpapers; leather a little rubbed and marked, with light tidemarks near the joints of the first volume; tidemark to the frontispiece; scattered foxing; an excellent set. (The frontispiece, with an image size 188 × 114 mm without any margins, has been mounted on thick paper; presumably this was done at the time the book was bound in the nineteenth century). Prince Adalbert (1811-1873) was a Prussian naval theorist and admiral; several journeys led him between 1826 and 1842 to the Netherlands, Britain, Russia, Turkey, Greece, and Brazil (Wikipedia). He spent the last four months on 1842 in Brazil. Alexander von Humboldt makes the following comments in his three-page introduction to this translation: 'this interesting Work ... conducts us through Brazil to the mouth of the Amazon River, and through this into one of its important tributaries, the Xingu, the course of which is now explored for the first time.... The Journal of Travels, printed originally only for the perusal of his friends ... is not in the strict sense of the word a scientific book; nevertheless it contains observations and views of nature and customs which reflect a vivid picture of the scenes which the Prince witnessed and passed through. Instruction is imparted in the most pleasing manner, when an unaffected simplicity and an absence of all pretension pervade a work like this'. This set was purchased at the dispersal sale of the Hope family's historic property 'Wolta Wolta' at Clare in South Australia; there is some serendipity in this, given the Schomburgk family's close connection with the state. Richard Schomburgk accompanied his explorer brother Robert on an expedition in 1840-44 to British Guiana, as botanist and historian. He later published the three-volume account of the expedition before emigrating to South Australia, where he was a pioneering vigneron and an influential head of the Adelaide Botanic Gardens ('Australian Dictionary of Biography').

calf
Calf or calf hide is a common form of leather binding.  Calf binding is naturally a light brown but there are ways to treat...[more]
edges
The collective of the top, fore and bottom edges of the text block of the book, being that part of the edges of the pages of a...[more]
octavo
Another of the terms referring to page or book size, octavo refers to a standard printer's sheet folded four times, producing...[more]
First Edition
In book collecting, the first edition is the earliest published form of a book. A book may have more than one first edition in...[more]