Join us October 7–16, 2022 for our upcoming virtual antiquarian book fair!
Preregister now for Biblio.live and get $10 to use at the fair.
Home Book Collecting Topics Walt Disney 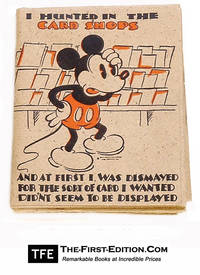 Almost every child in the world is at least a little familiar with the work of Walt Disney. From Snow White and the Seven Dwarves to the Lion King to Splash Mountain at Disney World, Walt Disney has had an undeniable impact on Western culture. Disney’s work has certainly evolved since Steamboat Willie opened at the Colon Theatre in New York in 1928, but his most interesting, provocative, and controversial work was produced during his early years.

A highly political figure during the 1940’s and 50’s, Disney social and cultural influences can be easily detected in his work, and some of his shorts and movies had to be edited due to their racist or anti-Semitic overtones. In fact, his 1946 animated live-action movie Song of the South has been locked in the Disney vaults because it conformed to the offensive ’happy slave’ narrative.

Disney’s personal biography is at times both inspiring and concerning, but it is always fascinating. And of course, the classic characters he created, including Mickey Mouse, Pluto, Goofy, and Donald Duck will always carry significance.

Biblio is lucky to have booksellers who offer antiquarian and unusual books and ephemera on Walt Disney, and all those intrigued by the man and his art would love any of these items.

Trivia: the term Disneyana was used among collectors in the 1960s-70s, but was popularized by the publication of Disneyana: Walt Disney Collectibles by Cecil Munsey in 1974.