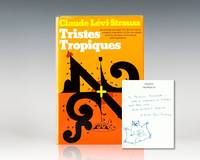 New York: Atheneum, 1974. First American edition of this translation, which is the first complete edition of Lei-Strauss' landmark work. Octavo, original cloth. Inscribed by the author on the half-title page, "To Patricia Anawalt who is interested in Indians and loves cats, with author's regards Claude Levi-Strauss." Levi-Strauss has added a large drawing of a cat below his inscription. The recipient, Patricia Anawalt was an anthropologist and authority on Mesoamerican ritual and attire, She wrote several books, including "The Worldwide History of Dress", which examined the costumes of a wide range of peoples, including Neolithic plant-fiber skirts, ancient Egyptian linen shifts and Mongolian shamanic robes. Translated from the French by John and Doreen Weightman. Fine in a very good faded dust jacket. Jacket design by Paul Bacon. A unique example. Tristes Tropiques is a memoir, first published in France in 1955. It documents his travels and anthropological work, focusing principally on Brazil, though it refers to many other places, such as the Caribbean and India. Although ostensibly a travelogue, the work is infused with philosophical reflections and ideas linking many academic disciplines, such as sociology, geology, music, history and literature. "One of the great works of the twentieth century" (Susan Sontag).

"A magical masterpiece."—Robert Ardrey. A chronicle of the author's search for a civilization "reduced to its most basic expression."

inscribed
When a book is described as being inscribed, it indicates that a short note written by the author or a previous owner has...[more]
jacket
Sometimes used as another term for dust jacket, a protective and often decorative wrapper, usually made of paper which wraps...[more]
octavo
Another of the terms referring to page or book size, octavo refers to a standard printer's sheet folded four times, producing...[more]
Cloth
"Cloth-bound" generally refers to a hardcover book with cloth covering the outside of the book covers. The cloth is stretched...[more]
fine
A book in fine condition exhibits no flaws. A fine condition book closely approaches As New condition, but may lack the...[more]