Home Back Lane Books (Member of IOBA) Under the African Sun 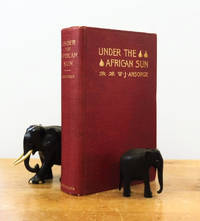 Under the African Sun

Under the African Sun: A Description of Native Races in Uganda, Sporting Adventures and Other Experiences

Under the African Sun A Description of Native Races in Uganda, Sporting Adventures and Other Experiences by W.J. Ansorge. Published by Longmans, Green, and Co., New York, 1899. First American Edition. 4to - over 9¾" - 12" tall. 355 pages, 16 plates, 2 colored plates and over 120 illustrations. Appendix A 'Birds' was compiled by Ernst Hartert, Director of the Tring Museum who studied Ansorge's collection. Red cloth boards with gilt titles; top edge gilt; title page printed in red and black. Light wear to boards; binding is tight and square; sporadic foxing ranging from very light to moderate and otherwise contents in fine condition without markings, tears or folds. All plates are present and in fine condition (not affected by foxing). Color plates: 'New Species of African Insects' (moths and butterflies) and a 'New Species of African Birds'; Frontispiece is a photo of Ansorge posed with a killed lion with caption "The Man-Eater's Career Ended". Chapter Titles: Anzibar And Mombasa; Caravan Life; The Uganda Protectorate; The Ravine District; Kavirondo; Usoga; The Waganda; At Kampala; The Soudanese; Unyoro; Our Stations On The Nile; On The Shores Of Lake Albert; Elephant-Hunting; The ''Man-Eater; Rhinoceros-Shooting; Hippopotamus-Shooting; Gazelles; Antelopes; Small Mammals; Reptiles; Butterflies, Moths, And Beetles.
Author's Full Title: W. T. Ansorge; M.A., LL.D/, M.R.C.S., L.R.C.P.; Late Senior Professor At The Royal College Of Mauritius; Medical Officer To Her Majesty's Government In Uganda. William John Ansorge (1850-1913) was a physician posted as a medical officer in Uganda and Southern Nigeria. In addition to his visits to various settlements, he travelled across Africa (northern Angola, Benguella, Mossamedes, Portuguese Guinea). Ansorge had a keen interest in natural history, and fauna and several species of animals, many fishes and three species of reptiles were named after him.

About Back Lane Books (Member of IOBA)

Welcome! BACK LANE BOOKS is home to thousands of carefully selected antiquarian, rare and used books. Visitors are welcome - please phone ahead to make an appointment. I strive to provide accurate descriptions of each listing and I always include my own photographs of the item for sale. Appraisals are also available. Colleen Croft.backlanebooks@gmail.com www.backlanebooks.com 604 209-5072

title page
A page at the front of a book which may contain the title of the book, any subtitles, the authors, contributors, editors, the...[more]
Cloth
"Cloth-bound" generally refers to a hardcover book with cloth covering the outside of the book covers. The cloth is stretched...[more]
New
A new book is a book previously not circulated to a buyer. Although a new book is typically free of any faults or defects,...[more]
gilt
The decorative application of gold or gold coloring to a portion of a book on the spine, edges of the text block, or an inlay in...[more]
tight
Used to mean that the binding of a book has not been overly loosened by frequent use.
fine
A book in fine condition exhibits no flaws. A fine condition book closely approaches As New condition, but may lack the...[more]