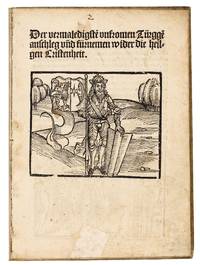 Strasbourg: Bartholomäus Kistler, 23 August [1502].
Extremely rare polemic pamphlet about the Ottoman threat.
This is the German translation of a treatise by the Franco-Flemish historiograph Guillaume Caoursin (c. 1430-1501). His account of the fictive correspondence between the Ottoman emperor Daglosius and his Beylerbeys (governors of major Turkish provinces) emphasises on the Ottoman threat, and, at the same time, confirms the power of the European countries and the church. Sebastian Brant edited this pamphlet as a favour to Cardinal Raymond de Gurck, who sojourned in Germany to raise money for a crusade.
Caoursin was vice-chancellor of the Order of the Knights of St. John of Jerusalem (Knights Hospitallers). The main seat of this order was in Rhodes from 1310 until 1523. Especially after the fall of Constantinople (1453) Rhodes and its neighbour island Cyprus became the most important Christian outposts in the Mediterranean Sea. When in 1480 the Knights of Rhodes succeeded in preventing a Turkish attack they were granted common attention and admiration. Already in the year of the siege the Master of the Order, Pierre d'Abusson testified to emperor Friedrich III the miraculous events that helped to fight and to overwhelm the Ottomans. The vice-chancellor Caoursin wrote a report of the siege, Obsidionis Rhodiae urbis descriptio (Description of the siege of Rhodes), which quickly became a 'bestseller' translated in many languages and repeatedly printed. According to that account the Hospitaller knights – in order to frighten the Turkish besiegers – raised a flag showing Christ, the Virgin Mary and their patron saint, John the Baptist, whereupon, allegedly, a golden cross appeared in the sky. Finally the success of the Hospitallers was secured by the death of Sultan Mehmed II in 1481 and the subsequent disagreements of his inheritors.
The severe conflict between the Occident and the Ottoman Empire flared up, however, around 1498/99, which might be one of the main reasons for the new release of the treatise at hand. Already in 1498 a single-leaf pamphlet was issued in Strasbourg by Mathias Hupfuff that complained about Turkish conquests and thus supported King Maximilian's appeal for warlike operations against the Ottomans. In 1499 Sultan Bajezid II's fleet appeared in the Mediterranean Sea to mobilize against Venice, resulting in a war that should last until 1503. In this historical context the present tract might have been seen as some kind of encouragement and reassurance that a menace of this extend was after all not impossible to overcome.
The booklet is handsomely illustrated with twelve woodcuts, printed from fourteen different blocks, in the typical Strasbourg fashion previously introduced by Johannes Grüninger: six of the illustrations are composed of two separate woodblocks combining a main scene with a complementary subject, such as a building, a messenger, and other accessory. Kistler utilized the typical Strasbourg woodcut style with narrow hatching, often with stout figures looking purposeful in dense compositions. Although the designer of the cuts is not identified, a possible candidate would be Bartholomäus Kistler himself who is confirmed as painter, illuminator and scribe. However, whether he produced the woodcuts for his own editions cannot be verified.
Most illustrations derive from Kistler's incunabula editions: the frontispiece with the standing knight holding shield and banner and other motives originate from the Prognosticatio by Johannes Lichtenberger, first printed by Kistler in 1497 (GW M18245). Scenes showing messengers and battles are taken mostly from Guido Columna's Historia destructionis Troiae in German (GW 7239), also from the German translation of John Mandeville's Itinerarium (GW M20418) or from the Book of Job (GW M08368). The last large woodcut showing the Virgin Mary surrounded by a rosary and the symbols of the four Evangelists comes from a Legend of Saint Anne (VD16 L977) first printed in 1501.
This book is extremely rare. We can trace only five copies in public libraries, and no copy on the market in the past forty years.

A.N.
The book is pristine and free of any defects, in the same condition as ... [More]
bookplate
Highly sought after by some collectors, a book plate is an inscribed or decorative device that identifies the owner, or former... [More]
vellum
Vellum is a sheet of specialty prepared skin of lamb, calf, or goat kid used for binding a book or for printing and writing. ... [More]
leaves
Very generally, "leaves" refers to the pages of a book, as in the common phrase, "loose-leaf pages." A leaf is a single sheet... [More]
Incunabula
Incunabula (incunable or incunabulum) refers to a book printed before 1501 - a pamphlet, a book or document that was not... [More]
verso
The page bound on the left side of a book, opposite to the recto page.
New
A new book is a book previously not circulated to a buyer. Although a new book is typically free of any faults or defects, "new"... [More]