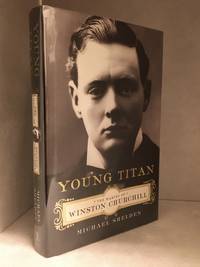 New York: Simon & Schuster 978-1-4516-0991-2 [978-1-4516-0991-2] 2013, 1st printing. (Hardcover) 383pp. Near fine in near fine dust jacket. Photographs, notes, bibliography, index. The bottom edge of the spine is lightly worn. "In modern memory, Winston Churchill remains the man with the cigar and the equanimity among the ruins. Few can remember that at the age of 40, he was considered washed up, his best days behind him. In Young Titan, historian Michael Shelden has produced the first biography focused on Churchill's early career, the years between 1901 and 1915 that both nearly undid him but also forged the character that would later triumph in the Second World War". Book about Winston Churchill. Time Period 1901-1915. (History--England, Biography, History--England, Politics--England, Prime Ministers--England, Social Reform).

âÈêJust when you think there can be nothing fresh to be said about the long life of Winston Churchill, along comes biographer Michael SheldenâÈçs page-turner about Churchill from age twenty-six to fortyâÈë ( The Washington Times ). In modern memory, Winston Churchill remains the man with the cigar and the equanimity among the ruins. Few remember that at the age of forty, he was considered washed up, his best days behind him. In Young Titan , historian Michael Shelden has produced the first biography focused on ChurchillâÈçs early career, the years between 1901 and 1915 that both nearly undid him but also forged the character that would later triumph in the Second World War. Between his rise and his fall, Churchill built a modern navy, experimented with radical social reforms, survived various threats on his life, made powerful enemies and a few good friends, became a husband and father, took the measure of the German military machine, and faced deadly artillery barrages on the Western front. Along the way, he learned how to outwit more experienced rivals, overcome bureaucratic obstacles, question the assumptions of his upbringing, value loyaltyâÈ'and how to fall in love. Shelden gives us a portrait of Churchill as the dashing young suitor who pursued three great beauties of British society with his witty repartee, political flair, and poetic letters. In one of many never-before-told episodes, Churchill is seen racing to a Scottish castle to prepare the heartbroken daughter of the prime minister for his impending marriage. Compulsively readable and illuminating, Young Titan has received critical acclaim from The Wall Street Journal , The Washington Post , USA TODAY , and The Washington Times , among others. SheldenâÈçs masterful work explores the high drama and intrigue that colored the era of ChurchillâÈçs promising and courageous youth.

Prices net to all in USD. We use Brodart dust jacket protectors. Our records are updated daily. We pack well and ship promptly. . Return your book for a full refund if not as described. More questions? Call us!

Seller rating:
This seller has earned a 5 of 5 Stars rating from Biblio customers.
Biblio.com member since: 2003
Winnipeg, Manitoba
Ask Seller a Question

spine
The outer portion of a book which covers the actual binding. The spine usually faces outward when a book is placed on a shelf....[more]
fine
A book in fine condition exhibits no flaws. A fine condition book closely approaches As New condition, but may lack the...[more]
jacket
Sometimes used as another term for dust jacket, a protective and often decorative wrapper, usually made of paper which wraps...[more]