BEACH GLASS BOOKS was begun in 2010 by award-winning Author Lindsay McAllister Zarse to publish her first children's book, The Magic of Topsail Island. The Beach Glass Books logo, a stylized image of a wave breaking over an open book, was created by artist/illustrator Brian Martin, who also illustrated The Magic of Topsail Island. The two later collaborated on two other children's books, MISSING! A Topsail Turtle Tale and Pirates on Friday.

Several years later author Ray McAllister (RayMcAllister.com) was able to secure the rights to his award-winning non-fiction books about the North Carolina coast, which he brought to Beach Glass. (The opportunity arose when legendary regional publisher John F. Blair, Publisher, had to be merged into another firm with the retirement of its principals.) The company became legally affiliated with Ray McAllister Books LLC and began distributing his beach books and two others. Therein followed the publication of an updated and enlarged second editions of Wrightsville Beach: The Luminous Island and Hatteras Island: Keeper of the Outer Bank, as well as the publication of a new book: Ocracoke: The Pearl of the Outer Banks. An expanded second edition of Topsail Island: Mayberry by the Sea followed.

For guidelines on having manuscripts considered for publication by Beach Glass Books, please see SUBMISSIONS at BeachGlassBooks.com

We're a small, independent, family run book seller specializing in current fiction and non-fiction, with an emphasis on Art, Art History, History, Memoirs, Travel Memoirs, Signed First Editions, and Literature in Translation.Do you have any questions about our books ? Let us know, we'd love to hear from you! Do you want to see a photo of a book before you order it ? We try to post as many photos as possbiel, but sometimes there will be a item in inventory that does not show a photo here. So feel free to ask for photos, we don't mind at all. We package all of our orders carefully either in a box that has been designed to ship books, or in a padded envelope. We want to make sure you receive your order in the best possible condition!Our preferred shipping method is USPS Media Mail. Recently, the USPS has added tracking to Media Mail , which has been a great addition to this service.If you do choose to have your order shipped "Expedited", my shipping cost may seem higher than expected. Some of our books are large format hardcovers that can cost quite a bit when shipped expedited. So I would like to make sure that I can cover the cost upfront. However, if the actual cost of expedited shipping is less than the charge, I will refund the difference!

We are strongly focused on books that would be of interest to both Canadian and US buyers. Local histories, genealogies, family histories, Canada/US Relations, Politics and Biographies. Especially small print and self published books unavailable through regular channels. 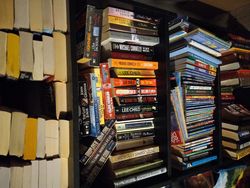 Hello I am an avid reader myself. I truely enjoy books and do not believe in throwing them away. Over the years My collection has grown, so I have chosen to get rid of some. I am looking forward to providing you your next great read and hope you enjoy

Search Within Bookstores specializing in Memoirs