We specialise in history, roman and greek classics, books dating from the 17th and 18th century, fine bindings and general second-hand stock.

Blacket Books is the business name of Liz and Ian Laing, who have been selling second-hand and antiquarian books since 1985. We are general booksellers but with some emphasis on Scottish, military and childrens books, and modern first editions. We are members of the Provincial Booksellers Fairs Association (PBFA) and sell at book fairs throughout Scotland and the north of England. Our aim is to offer for sale worthwhile, collectable books at reasonable prices.

Established since 1982, General and varied antiquarian and second-hand stock.

We are based in Wigtown, the Scottish Booktown. Our shop is a converted stables, fully wheelchair accessible, and has a small peaceful garden where you are welcome to sit and relax with your books. We specialise in second-hand books on Archaeology, World Mythology and Folklore, Scottish books, Theatre, Film and TV. We also have General stock - poetry, philosophy, biography, travel, education etc - and a Children's section.Our premises are open Monday, Wednesday and Saturday 10am-3pm, Sunday 11am-3pm .

We are a mail order business selling books online since 1996. Most of our stock are academic titles in English, but we also have small numbers in Spanish, French, German, Italian and Gaelic.

We also have a shop - specializing in used and rare Scottish, Irish, Welsh, Gaelic, British and Textile books. Open by appointment. 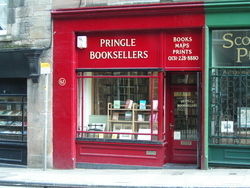 We have been established in Scotland's Capital City for twenty years and trade mainly from our retail premises as well as exhibiting at a number of Book Fairs throughout the year. We stock a wide range of books. We are members of the ABA and ILAB

Search within Bookstores Specializing in Scottish