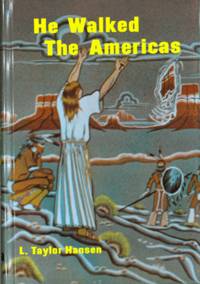 Description:
Very good, clean copy with pictorial cover (no dj, as issued).A collection of Native American myths and legends about the White Prophet (the Master Jesus) who went around the American continents and was most widely known by the names of Quetzalcoatl and Kukulcan. The Algonquin asked for His childhood name when He lived across the ocean and called Him Chee-Zoos -- God of the Dawn Light.L. Taylor Hansen (1897-1976) was the daughter of Frank Bursley Taylor (1860-1938), a wealthy amateur geologist who was co-originator of the famous Taylor-Wegener Theory of Continental Drift which is now universally accepted as the basis for the plate tectonics theory of geology, and which she wrote about in Some considerations of and additions to the Taylor-Wegener hypothesis of continental displacement
(1946). The author was also an authority on the native peoples of North and South America, having studied among them for 30 years.
Item Price
$29.92
$11.07 shipping to USA