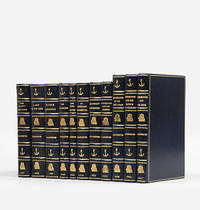 Michael Joseph founded his publishing house as a subsidiary of Victor Gollancz in 1935, a time when many other publishing houses were folding or suffering serious financial difficulties. Joseph and Gollancz soon began to clash on various topics — from publishing material to financial targets. After Gollancz tried to censor Sir Philip Gibbs’s Across the Frontiers for political reasons, Joseph bought out him in 1938. Joseph published the first edition of the book later that year as well as a revised edition the following May. Other publications include D. F. Karaka’s autobiographical book about his time in England, I Go West (1938) and various works by Bertrand Russell, H. E. Bates, C. S. Forester, Monica Dickens, and Richard Llewellyn.