BiblioWorks, now in its 5th year, and with a new President, sets out to build its 7th public library in rural South America. 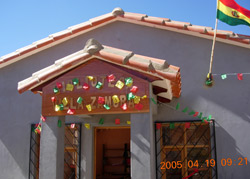 Many of our long time bookseller and customer friends probably remember the first library we built in South America back in 2004/2005.

In fact, many were key sponsors along with Biblio in funding the construction and upfit of Morado K’asa’s first ever public library.  Since that time, the non-profit BiblioWorks has been created out of that original social endeavor, devoted to promoting literacy and access to books in impoverished regions.  And, since 2005, BiblioWorks has built 5 more public libraries in rural Bolivia while helping to create the beginnings of a first-ever library system in the province of Chuquisaca, bringing together two additional unlikely partners in the U.S. Embassy and El Banco del Libro, the Bolivian government’s ministry of libraries.  All of these libraries are actively maintained and supported by BiblioWorks through training and educational programs.

BiblioWorks is now proud to announce that it has elected a new President to guide its next chapters: Megan Padilla.  For those who don’t already know Megan, she was the first Latin American Project Coordinator for BiblioWorks (as Megan Sherar back then) and the amazing driving force on the ground building the first 5 libraries in her 3 years of service in Bolivia.  Now, having returned to the United States, the organization is excited to have her leadership at the helm in continuing its mission, while Matt Lynn continues as her in-country successor.

Not one to rest on her laurels, Megan is already moving BiblioWorks forward into its next project: the construction of its 7th library in Tomina (also in the Chuquisaca province), slated for construction in Spring 2011.  Biblio pledged to help raise $10,000 towards this effort: this is where you come in!  We hope you’ll find the hard work its small staff in Bolivia and stateside volunteers do in promoting literacy and books in this developing nation a worthy cause that you want to support alongside us.  Please take a moment to learn more about BiblioWorks and the Tomina project, or to make a donation now.

On behalf of BiblioWorks and its staff:  Matt Lynn & Maritza Valdez, Megan, and the rest of the volunteers of BiblioWorks, thank you for both your past and future generosity!