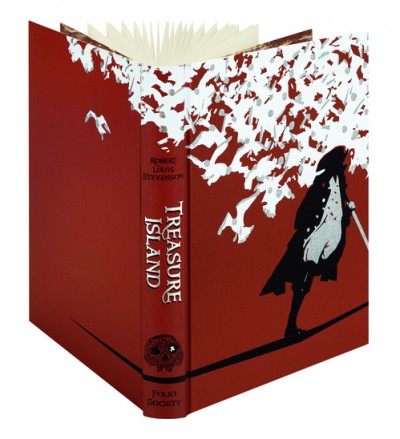 Since 1883, Robert Louis Stevenson’s Treasure Island has set the standard for pirate tales, igniting a passion that has endured ever since. The morally ambiguous Long John Silver, the fearsome ship The Jolly Roger, even Davy Jones’s locker have entered our collective imaginations. The swashbuckling adventure was originally published with illustrations by N.C. Wyeth, and those images of bloodthirsty pirates seeking booty are forever intertwined with Stevenson’s story.

As iconic as those images are, The Folio Society felt it was time to give the book an update, and with an eye to exquisite craftsmanship and design, the London-based publishing house has just released a sumptuous collector’s edition of Treasure Island. Introduced by British children’s book author Michael Morpurgo, this version includes new illustrations by Virginia native Sterling Hundley. From his studio outside Richmond, Hundley spoke with me about the challenges of tackling a project where an illustrator’s work is so associated with a particular book.

Hundley admitted to some initial intimidation, but a healthy dose of self-assurance helped him work through his doubts. “Wyeth’s Treasure Island is like the third rail for illustrators – you don’t touch it,” he said. “After I committed to the project I asked myself what I was thinking, because the cultural implications of this book are so widespread. I reminded myself that Folio hired me to give a classic tale a contemporary look.” 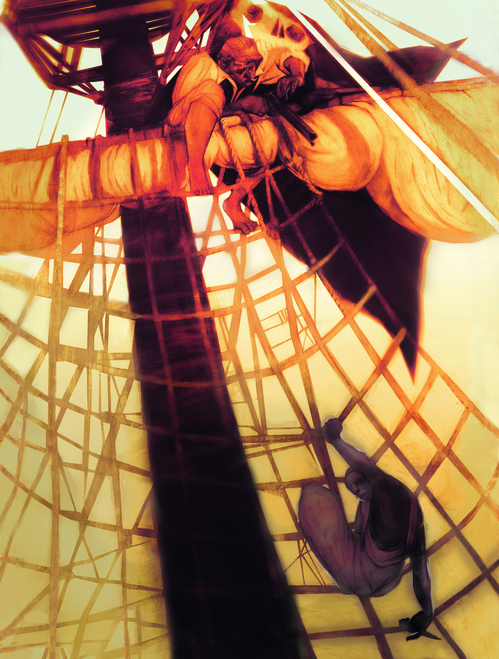 ‘One more step, Mr. Hands,’ said I, ‘and I’ll blow your brains out!’ Image from The Folio Society’s Treasure Island, illustrated by Sterling Hundley. Reproduced with permission.

Initially Hundley worked big, like Wyeth; epic oil paintings with grand, sweeping gestures. He soon realized that imitation would not work for this project. “I had a moment of clarity where I wondered why I would try to do anything that gets anywhere close to Wyeth when I knew I couldn’t. So I returned to my roots in draftsmanship.” (Hundley’s work has appeared in Rolling Stone, The Washington Post, The LA Times, and other publications.) Working on a smaller scale allowed him to create detail and add refinement. Ultimately, Hundley’s oil paintings and drawings were brought together using a sophisticated Photoshop program using tools that mimic real brushes and allow the artist to control opacity, viscosity and flow. The result is refreshingly modern.

There are images where Hundley acknowledges the old master gracefully: In one pivotal illustration, Jim Hawkins has been chased into the mast by the pirate Israel Hands. In Wyeth’s depiction, Jim has already shot Hands, whom we see falling into the water. Hundley also recreated the scene, but altered the perspective. “I had to do that scene, and with the way the signatures were laid out, I couldn’t skip it. I put Jim in the mast, but I chose a different moment in time, just before Jim has the upper hand.” In another illustration, the pirate gang is crossing a wall, but Hundley shows the attackers from a rear position, rather than the side shot that Wyeth chose.

Hundley had free reign when it came to designing the cover art, endpapers, even the slipcase, which is a topographical map of Skull Island, with an X marking a hollow eye socket. (The image is also recreated on the spine, as seen above.) Complete with eleven interior plates, the project conveys the energy and violence of the original artwork while navigating readers through this violent and perilous pirate world.