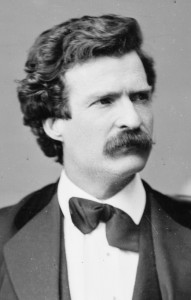 Articles written by Mark Twain when he was a 29-year-old reporter for the Territorial Enterprise in Virginia City, Nevada, have been uncovered by scholars at the University of California, Berkley. Twain was stationed for a year in San Francisco where his job was to write a daily 2,000-word “letter” about San Franciscan life to the readers of the Territorial Enterprise. His colorful and amusing anecdotes – already illustrative of his later hallmarked style – offer an intriguing insight into a young man at a crossroads. Twain, in 1865, was nearing his 30th birthday and still unsure of what he wanted to do with his life.

While scholars have long known that Twain wrote for the Territorial Enterprise, his contributions were considered lost owing to a series of fires that destroyed back issues of the newspaper. Bob Hirst, editor of the Mark Twain project at UC Berkeley, sought out reprints of Twain’s articles that might have appeared in other Western newspapers. Hirst and his team combed through back issues of hundreds of newspapers, taking advantage of recent digitization efforts, and discovering many of Twain’s letters along the way. Some of the letters were unsigned, but the authorship was obvious from Twain’s distinctive style.

In 1865 Twain was unsure of his future. He was in debt, frequently drunk, and unconvinced of his abilities as a writer. After a year of writing his San Francisco reports, Twain decided to commit to the writerly life, boarding a ship for Hawaii and writing fiction and humorous essays. A few years later he published The Innocents Abroad, about Americans traveling in Europe, which launched his career and remains one of the bestselling travel books of all time.

Twain’s letters from San Francisco, as well as a variety of other lesser-known writings, will be available on the Mark Twain Project website.