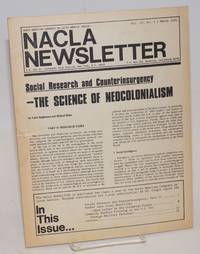 New York: North American Congress on Latin America, 1970. 16p., wraps. This issue includes "The Science of Neocolonialism part 2" by Carol Brightman and Mike Klare, "Father Lain Joins the Guerrillas," "Chemical Warfare Training in the U.S.", illustrations, tables. The information source for the Left in Latin America. Vol. IV, No. 1, March. The NACLA Newsletter, which became the Latin America & Empire Report in the early 1970s, was the primary source for Left-wing reportage on events and institutions affecting the people of Latin America, occasionally expanding coverage to the Mid-East, Southeast Asia and,of course, the Empire. Each issue, published monthly, is filled with lists,statistics, reading lists, tables, maps and other extremely useful information on the activities of the CIA, US and multinational corporations, banking institutions and military-police tactics throughout South and Central Americas, the islands and Mexico.

Seller rating:
This seller has earned a 5 of 5 Stars rating from Biblio customers.
Biblio.com member since: 2005
San Francisco, California
Ask Seller a Question

Bolerium Books specializes in American social movements and related topics along books on China & Japan in English & Asian languages. You can sign up for free email lists in our subject areas at www.bolerium.com. We are located in San Francisco at 2141 Mission, Suite 300 (between 17th & 18th St.). We're open by appointment only during the current COVID-19 epidemic.