Home Paul Haynes Rare Books Narrative of the United States Expedition to the River Jordan and the Dead Sea. With a map from accurate… 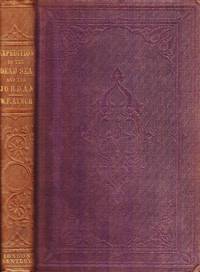 Narrative of the United States Expedition to the River Jordan and the Dead Sea. With a map from accurate surveys. A new and condensed edition.

Narrative of the United States Expedition to the River Jordan and the Dead Sea. With a map from accurate surveys. A new and condensed edition.

Provenance of interest: Armorial bookplate of S. F. Widdrington. From the library at Newton Hall.

Shallcross Fitzherbert [Jacson] Widdrington 1826-1917. A traveller, antiquarian and artist. "Dara el Abead. The Coptic Monastery" 1868 is one of his works. Succeeded to the Hauxley and Newton-on-the-Moor Estates on the death of his uncle in 1856, under whose will he assumed the name Widdrington. Shallcross significantly remodelled and enlarged Newton Hall in 1864.

The Country House Sale - Newton Hall 20 January 2010. Christies. London. "The Widdringtons were a tremendously wealthy family. Newton Hall and its contents reflect a particular way of life and now it is coming to its end. The hall is a time capsule. Nothing was thrown away." The sale of the contents of the house and its library of books also included a number of watercolours and drawings by Shallcross, including topographical views of Italy, The Dardanelles, Algiers and Egypt.

His brother Widdrington Jacson (b1824) of the 41st The Welch Regiment was killed by a fall from his horse on the 10th May 1845 in Brecon where there is a memorial monument inscription in his memory.

His wife Cecilia Widdrington 1840-1936 was born Cecilia Gregg Hopwood. On all occasions she wore steel-capped workman's boots. With her husband she travelled widely, going up the Nile by streamer before the source had been discovered. Mr Widdrington studied antiquities. Her first child, born after her marriage to Shallcross, was by another man. Roger Fry adored her "She it was who undertook to educate him in the art of love…" Roger Fry - Art and Life by Frances Spalding.

Aleen Isabel Cust was born in 1868, one of six children of Sir Leopold Cust. When her father died in 1878, at the age of ten she came under the guardianship of Shallcross Fitzherbert Widdrington at Newton Hall. The Widdringtons encouraged her ambitions: Cecilia believed in careers for women, and she encouraged Aleen to do more with her life than fulfill the genteel expectations of Lady Cust. ODNB

spine
The outer portion of a book which covers the actual binding. The spine usually faces outward when a book is placed on a shelf....[more]
bookplate
Highly sought after by some collectors, a book plate is an inscribed or decorative device that identifies the owner, or former...[more]
edges
The collective of the top, fore and bottom edges of the text block of the book, being that part of the edges of the pages of a...[more]
gilt
The decorative application of gold or gold coloring to a portion of a book on the spine, edges of the text block, or an inlay in...[more]
sl.
slight
Cloth
"Cloth-bound" generally refers to a hardcover book with cloth covering the outside of the book covers. The cloth is stretched...[more]
ffep
A common abbreviation for Front Free EndPaper. Generally, it is the first page of a book and is part of a single sheet that...[more]
octavo
Another of the terms referring to page or book size, octavo refers to a standard printer's sheet folded four times, producing...[more]