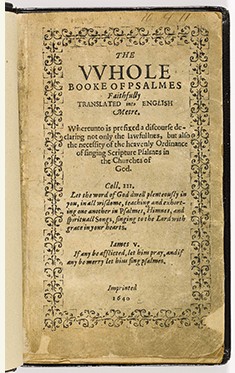 Setting a world record for the most expensive book ever sold at auction, the Bay Psalm Book was sold for $14,165,000 to David M. Rubenstein from Sotheby’s auction house.  Rubenstein works for an investment firm in Washington, DC, and according to the New York Times, Rubenstein plans to lend it to libraries across the country.

There are only 11 known copies of the Bay Psalm Book, which makes it an incredibly rare find.  Printed in 1640, it is the first book printed in English in North America, just two decades after the Mayflower carried the Pilgrims to the New World.

This particular Bay Psalm Book contains numerous printing and spelling errors, typical of the very early printing presses.  The New Yorker explains that the preface of the first edition includes the disclaimer that the printers

“…respected rather a plaine translation, then to smooth our verses with the sweetnes of any paraphrase, and soe have attended Conscience rather then Elegance…”

Considering that the Bay Psalm Book was translated from Hebrew to English, the typographical and spelling errors are to be expected.  When they displayed the book for auction, Sotheby opened the book to Psalm 23, printed as thus:

The Lord to mee a shepheard is,
want therefore shall not I,
Hee in the folds of tender-grasse,
doth cause mee downe to lie:
To waters calme me gently leads

Anyone familiar with that particular Psalm can see the interesting translation and word choices used, as well as the idiosyncratic spelling.

This particular book carries a great deal of cultural and historic significance to the United States, and considering its connection to the Pilgrims, it seems only appropriate that such a book is brought to the public eye in the season of Thanksgiving.