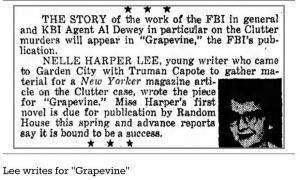 In a story well known to American literature enthusiasts, Harper Lee accompanied her childhood friend Truman Capote to Kansas in the wake of a brutal quadruple murder in 1959. Capote would later publish the hugely popular “nonfiction novel” about the Clutter Family murders entitled In Cold Blood seven years later.

Capote brought Lee with to Kansas to help him interview the locals about the murders, although he later downplayed her contribution, referring to her instead as a “research assistant.” Lee, meanwhile, ramping up for the publication in 1960 of To Kill a Mockingbird, wrote her own article about the murders for Grapevine magazine, a periodical published for members of the FBI. Lee’s article, which was published unsigned, has been re-discovered by Lee biographer Charles J. Shields.

Lee’s article appeared in the March, 1960 issue of Grapevine. While the article was unsigned, biographer Shields conducted some sleuthing and found evidence that he believes confirms Lee’s authorship.

Shields found mention in a column in the Kansas newspaper the Garden City Telegram from February, 1960 which read, “The story of the work of the FBI in general and KBI Agent Al Dewey in particular on the Clutter murders will appear in Grapevine, the FBI’s publication.”

“Nelle Harper Lee, young writer who came to Garden City with Truman Capote to gather material for a New Yorker magazine article on the Clutter case, wrote the piece. Miss Harper’s first novel is due for publication … this spring and advance reports say it is bound to be a success.”

How right the columnist was.